How to Complete Leyndell, Royal Capital in Elden Ring?

To help you get around the city, we’ll show you how to take down all of the bosses you come across. We’ll go over the most direct path to achieving your primary goals in this area once more.

Take your time exploring this massive metropolis and refer back to this walkthrough if you get lost or need some pointers along the way playing Elden Ring.

Make it Back Down to Ground Level 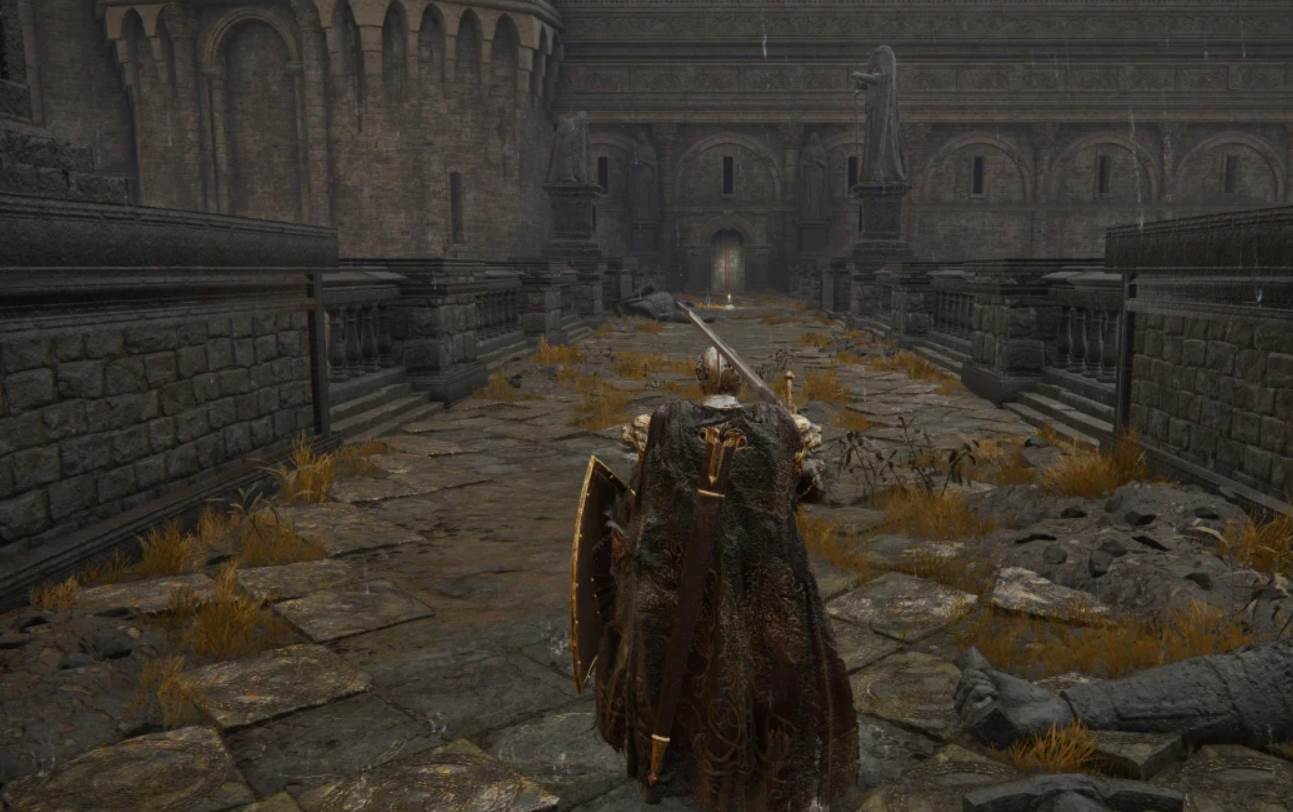 This guide begins at the battle with the Draconic Tree Sentinel at the entrance to Leyndell, the Royal Capital. Having it behind you, continue on your way into the city.

Take some time to rest and level up after a grueling battle on the bridge leading into the city’s center. Once you’ve climbed the stairs on your left, take the elevator to the top.

Up another stone stairwell after passing through the church on the straight path ahead of you. First look at the Royal Capital of Leyndell with another Site of Grace to your right in this room. 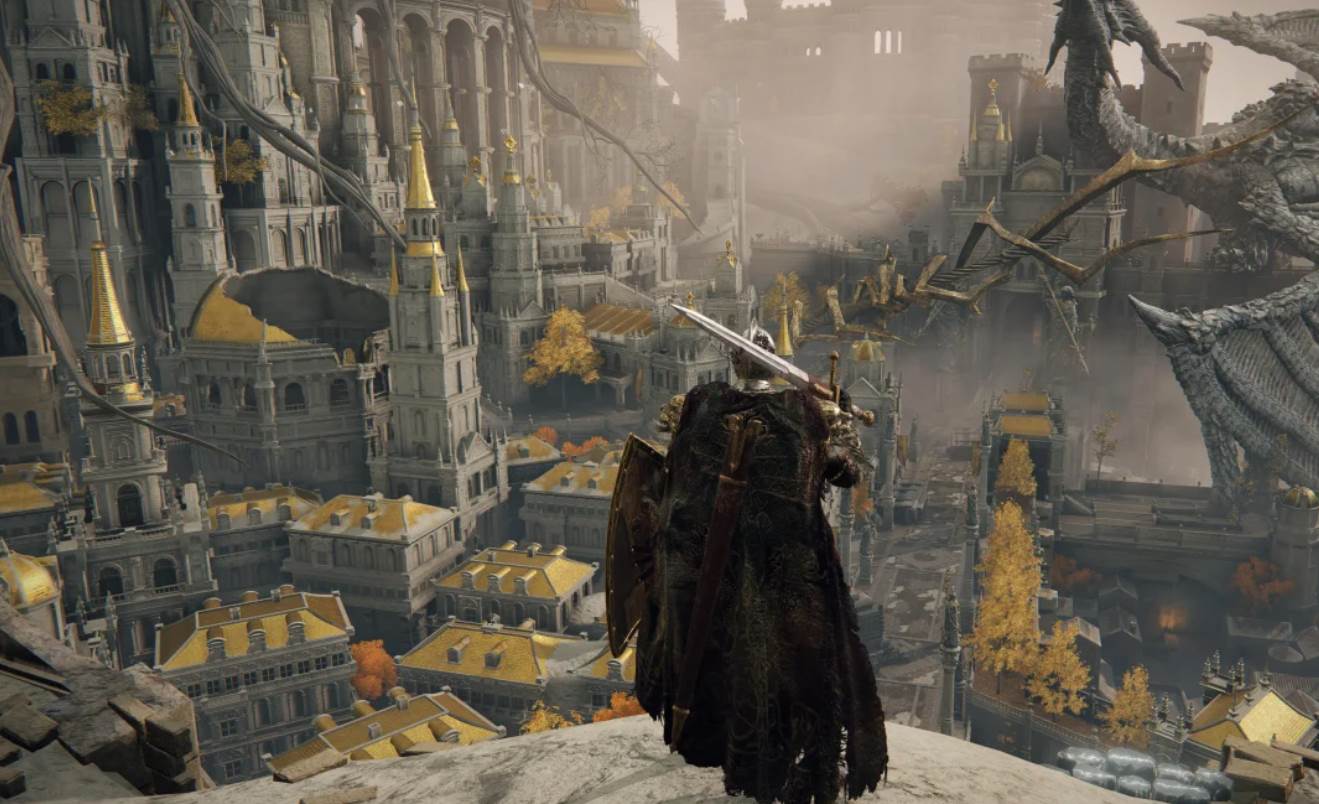 If you want to get a stunning view of the city, follow the path around to the left and look back. You’ll soon encounter a new enemy type: a musical instrument-playing creature. Even though there may be a large number of them, they aren’t particularly dangerous.

Take them out one by one before making your way into the ruined building in front of you. There will be a stationary enemy that is spitting fire in front of it. If you sprint to the left and then attack from behind, you’ll have no problem slipping past the defense.

Make your way to the green room below, but be extra cautious around the lone enemy you’ll find there. Then, to get a little closer to the ground, take another elevator back down. 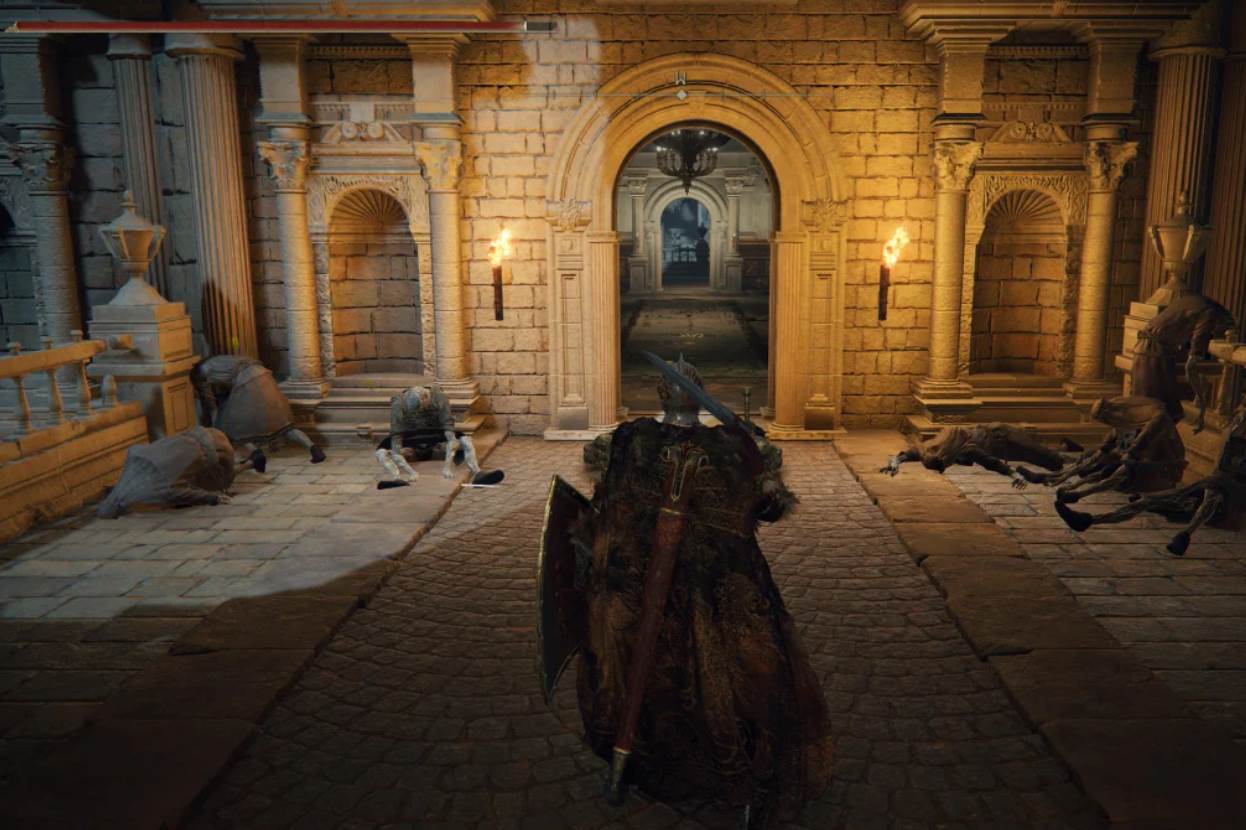 Another new enemy type is on the horizon, and it’s a double-edged sword: it both attacks and defends itself. You’ll find yourself in a posh corridor with a barrel-blocked entrance to your right and an open one to your left if you turn around and follow the path.

Whichever one you choose, be prepared for a tough fight. A knight armed with a lightning-charged spear is waiting for you when you roll through the barrels.

There are three new enemy types all clustered together on the left side of the path, and they’re extremely difficult to deal with all at once. 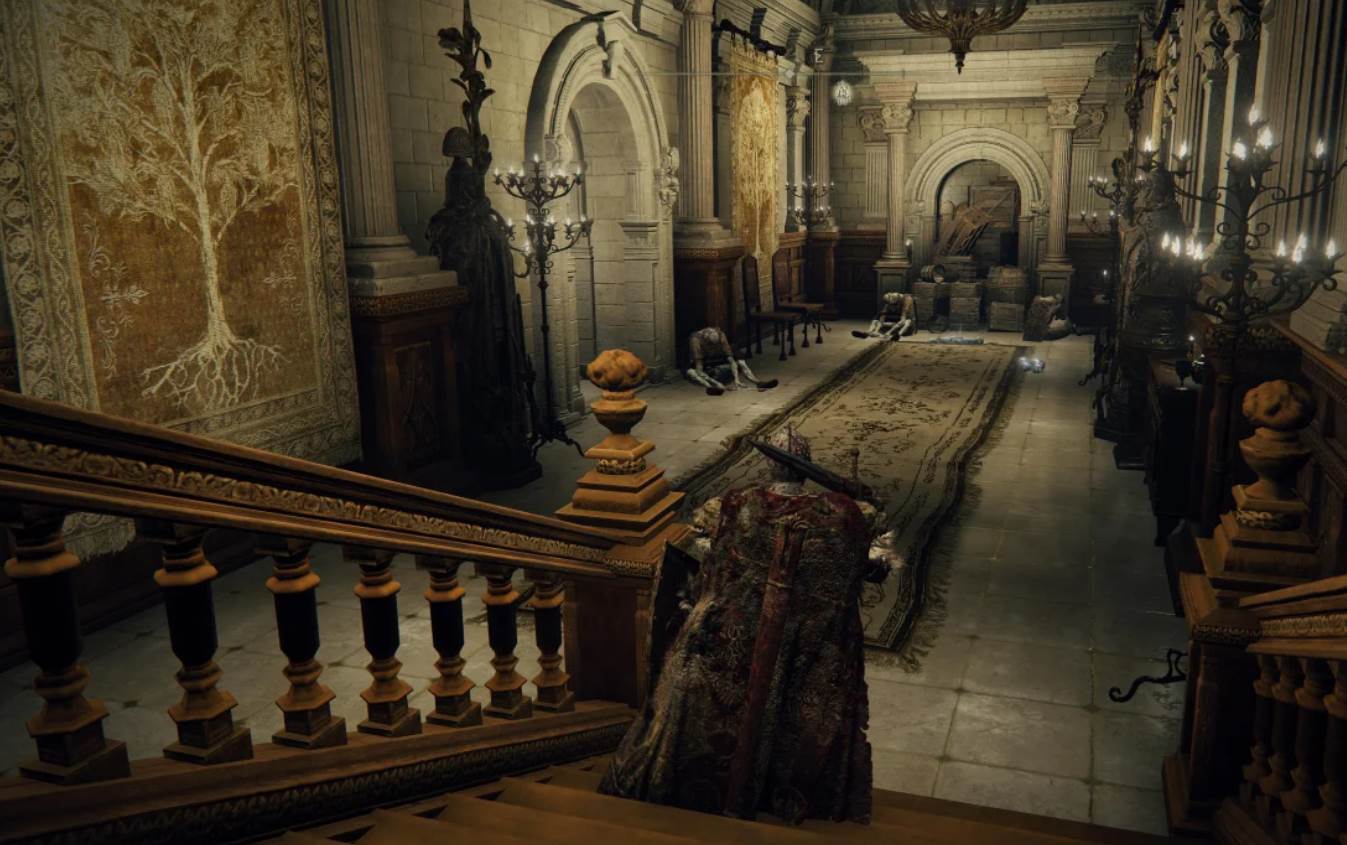 Take the left path, and try to lure each enemy into the corridor you begin in one by one as you progress through the game. You must also avoid the enemy’s flaming arrows at all times. Their combined strength is lethal. It doesn’t matter which path you take, however, because they all lead to the same place at the end. 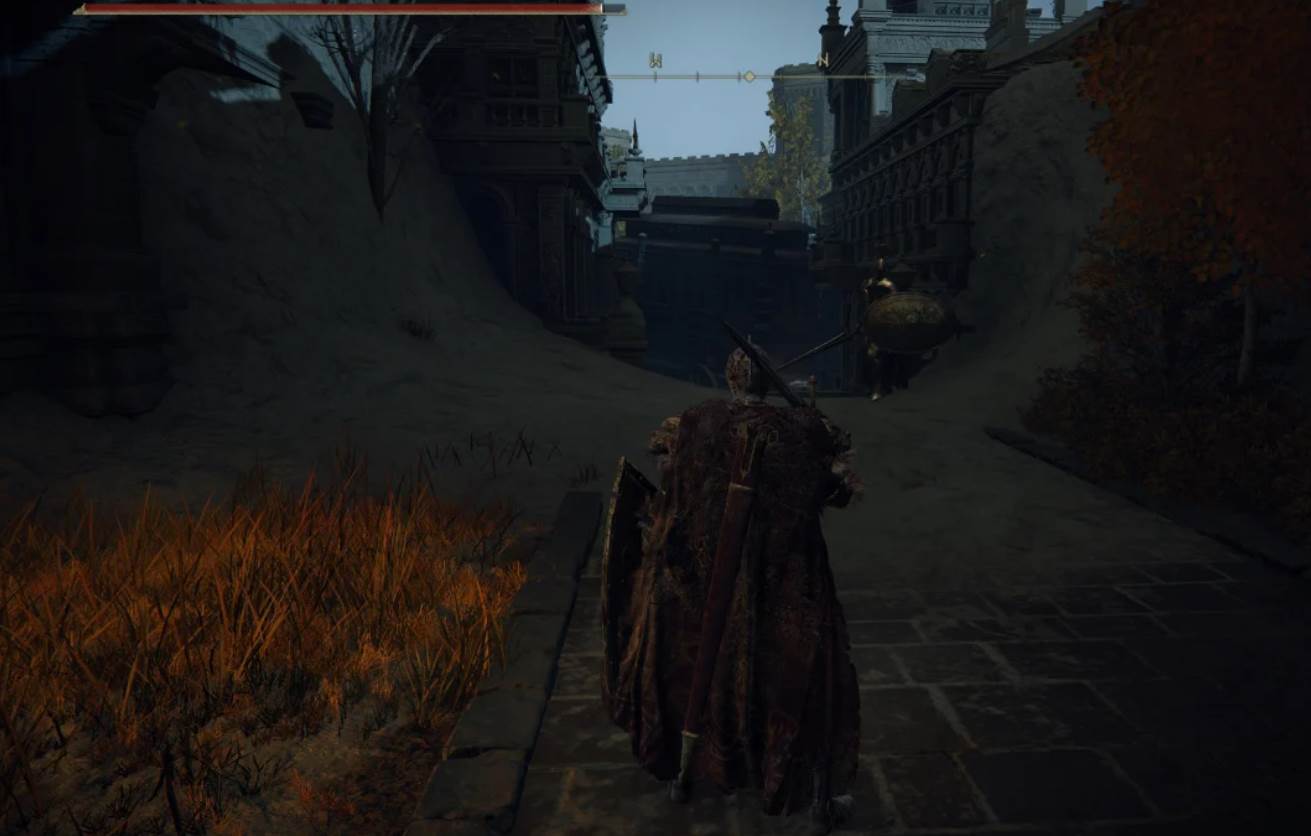 In the middle of the road, a large carriage with a golden knight astride it signals your arrival. To return to Leyndell’s main road and ground level, defeat it and press forward.

You now have a plethora of choices: there are sights to see and things to learn about almost everywhere you look. But to get through Leyndell as quickly as possible, we need to get to the Site of Grace known as West Capital Rampart in order to set up a checkpoint for the events that are yet to come.

Once you’ve made it onto the main path, you’ll want to head west to the point where the road begins to slope upwards with large statues on both sides. A Erdtree Avatar will appear as you get closer.

This isn’t a boss, but you’ll need to defeat it if you want to make your life easier. Then proceed to the stone steps below the two enormous statues that stand along the main road, where your enemies await your arrival. 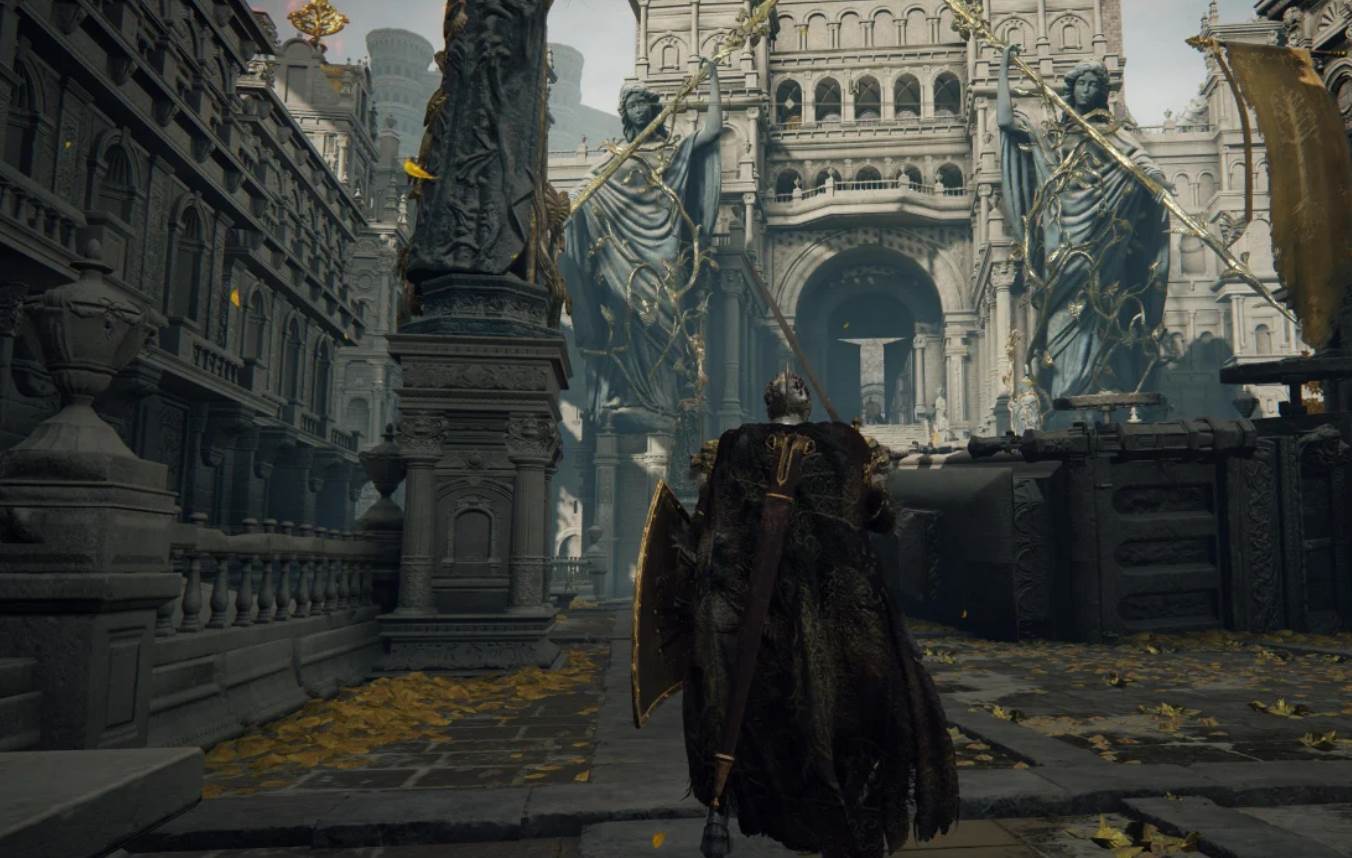 Pass through the gate and take a left after defeating the opponents. The horse stables you’ll see have a large tree root sprouting out of the ground as you run past them. To get to the Site of Grace, we’ll have to scale this mountain.

It’s best to start at the root and work your way up, but don’t go too far. Look for a smaller root coming off of the main one that veers left, and follow it to the building that it connects with. Toward the bottom, there’s a statue and a Golden Seed. 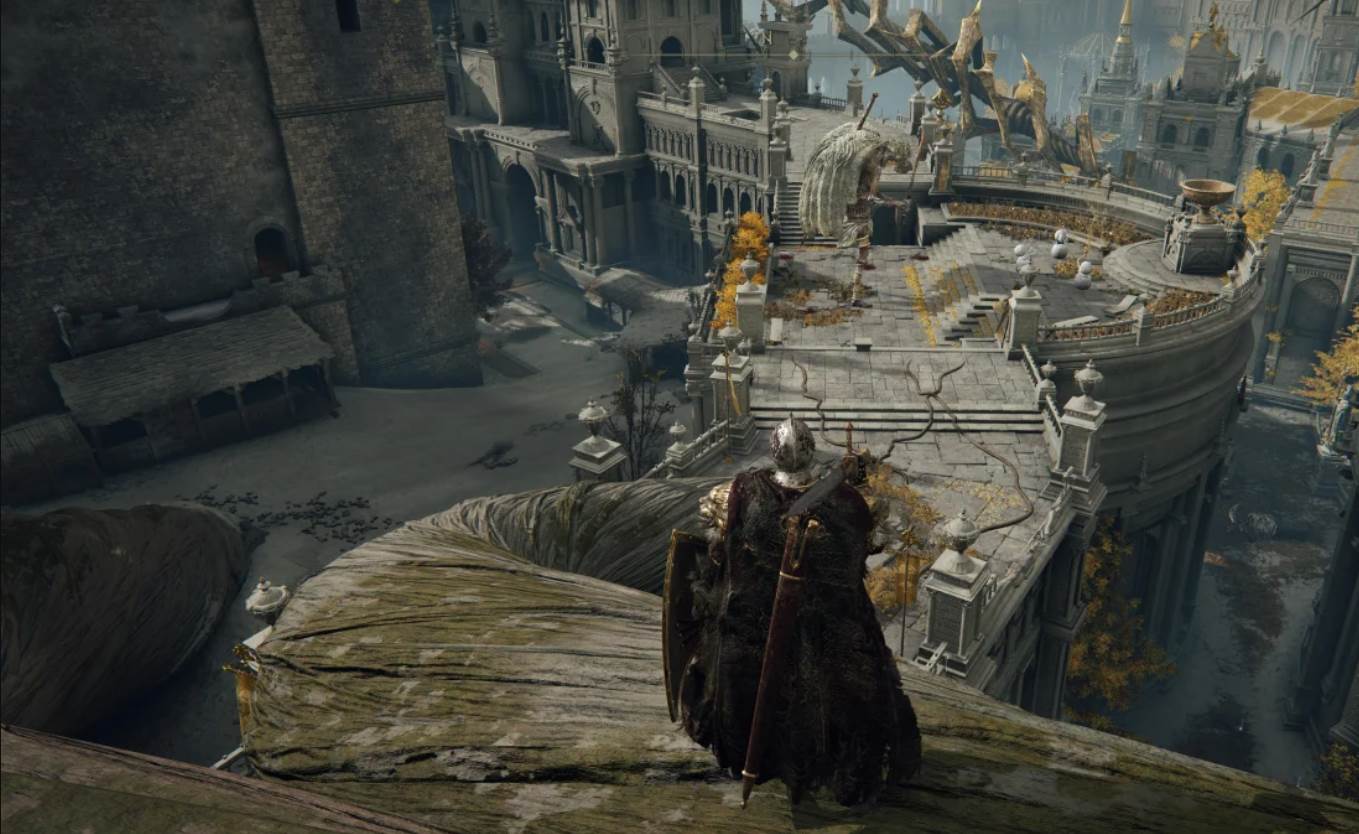 Avoid the two descending stairwells as you make your way past the enemies and into the building ahead. We’re looking for the Site of Grace right away, so look to your right as soon as you enter.

Now that we’ve established this useful checkpoint, we can proceed back to the enormous tree root we just scaled. As you make your way up the root, be sure to take out any enemies that stand in your way. 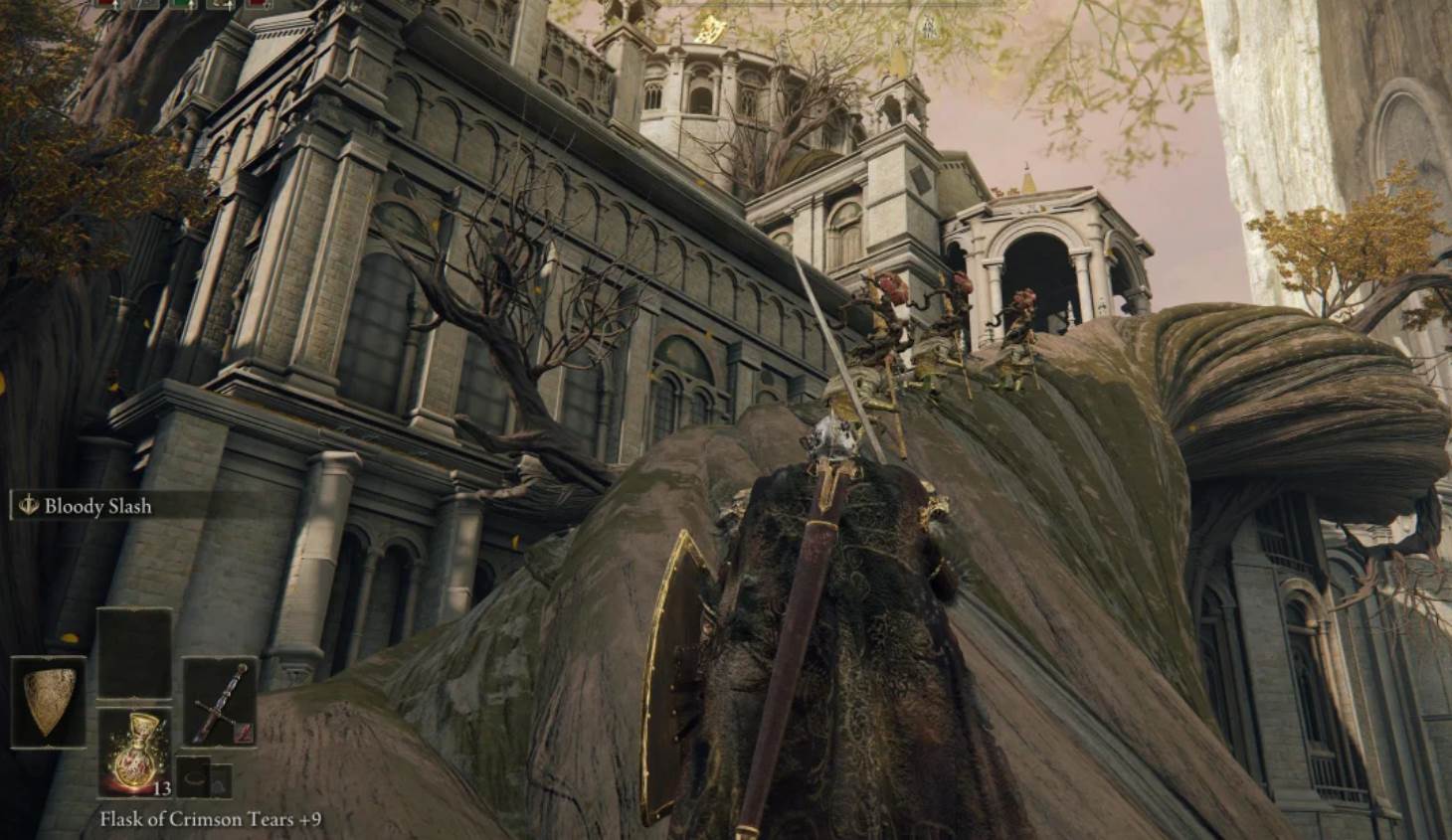 Wherever you spot an enemy on the tree, this is where you need to go to take care of business. It’s time for a boss fight once you reach the top and return to solid ground.

Godfrey, First Elden Lord, is now yours to face! Don’t be alarmed; he’s not that difficult to defeat if you know how to go about it.

Now that Godfrey, the First Elden Lord, has been defeated, it’s time to face Morgott, the Omen King, the next major challenge. The stakes are much higher in this battle. Afterwards, exit through the Erdtree’s open exit, resting at the Site of Grace that opens up. 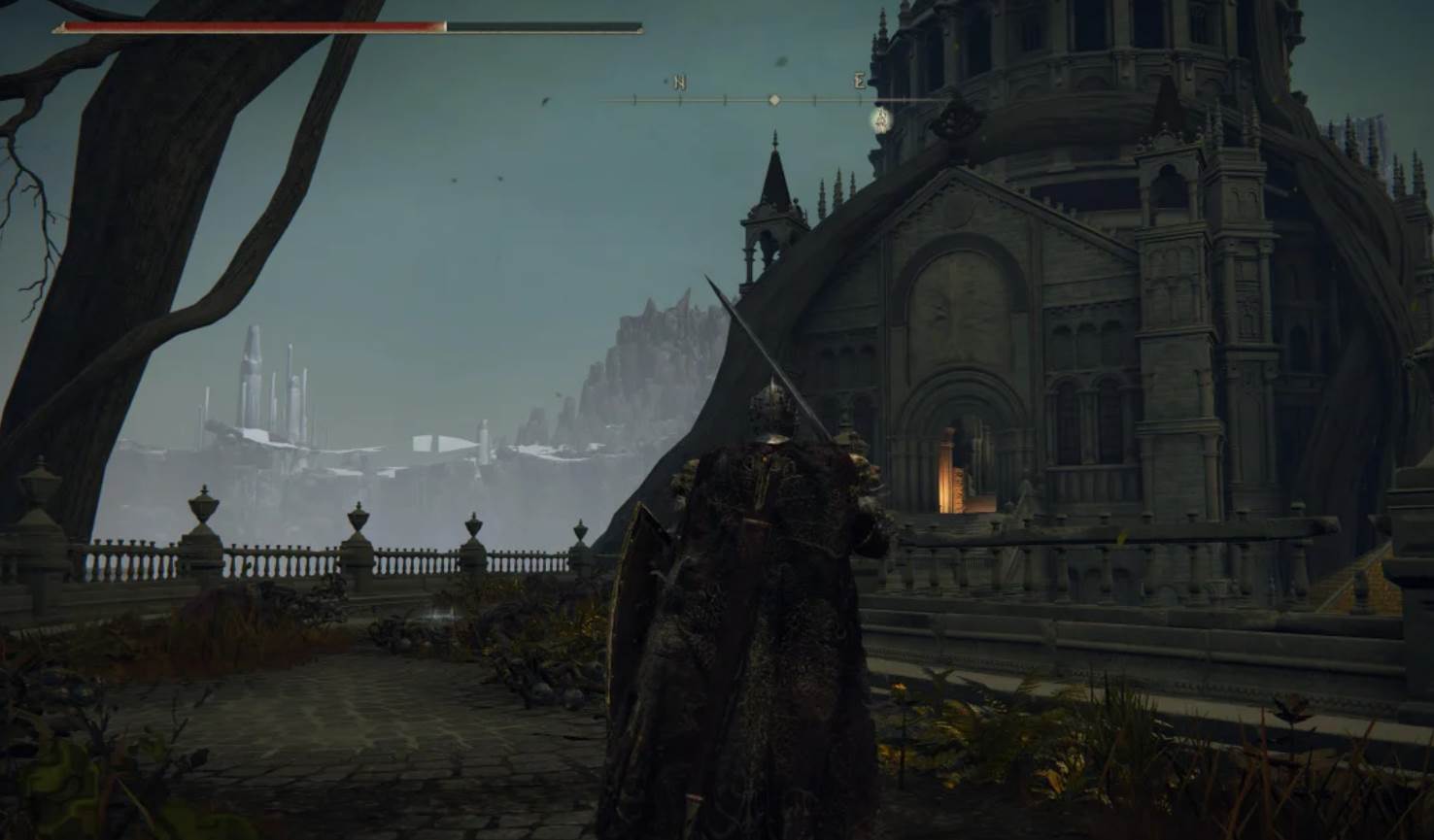 It will appear to be a dead-end, but jump onto the tree branch on your right and follow it to the top of the room where you fought Godfrey, First Elden Lord.

As a result, you can now take a different route to the boss fight, one that includes a Site of Grace in between. Recharge your batteries, call upon the power of Melina, and face off against Morgott, the Omen King.

Once Morgott, the Omen King is dead, we can leave the Royal Capital of Reyndell and continue our journey. We won’t be using the path behind the boss arena we just fought in order to accomplish this.

Instead of going west, we’ll make a U-turn and head east. As a first step, we need to return to the location where we first encountered Erdtree Avatar, the West Capital Rampart marked with the Site of Grace symbol. 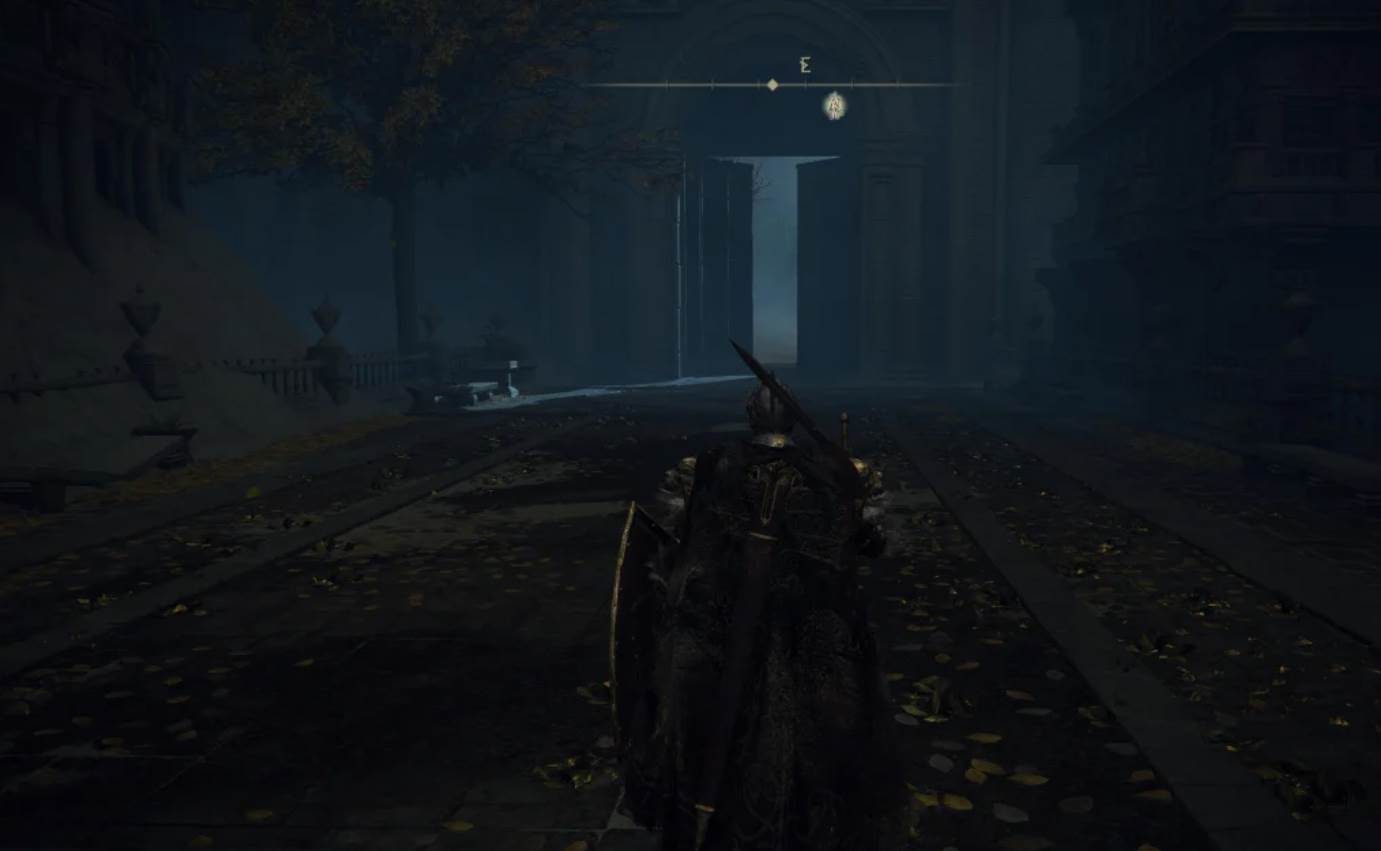 To get to the boss fights, turn around and go back the way you came. As you can see on the map, we no longer need to go southwest but rather northeast. Head down the main road, away from the two huge statues where the enemies on the staircase gather. A set of doors that can be opened will eventually be found.

Straight ahead and up the long staircase ahead of you, kill the enemies you come across on your way. You’ll need to use the lever in the center of the elevator up ahead to take you to the upper floors of the building. You’ll see a knight on horseback ahead of you.

You won’t be able to summon Torrent in this situation, so you’ll have to be on your guard. There will be another elevator in the next building, this one going down. Our journey continues in the Mountaintops of the Giants if you take this path.

Well, that’s all we have here about how you can complete Leyndell, Royal Capital in Elden Ring. We hope this guide helped you.

Published on 16 days ago 2 min read

How to Get the Gargoyle’s Black Axe in Elden Ring

Published on 22 days ago 1 min read

Elden Ring Seluvis Quest: Should You Give Nepheli the Potion?

Published on 22 days ago 3 min read

Published on 18 hours ago 9 min read