The Church of Inhibition is one of Elden Ring’s most intriguing and difficult-to-reach locations. To say that a game is full of interesting and challenging areas is an understatement. To get to this location, you’ll need to avoid the crippling status effect of Madness, which makes it frustrating.

Where is the Church of Inhibition?

The Liurnia of the Lakes region is home to the Church of Inhibition. You’ll have to go through the Frenzied Flame Village to get there. Because of a nearby tower with several enemies atop it to the north of the village, this is a problem.

From a distance, these enemies will inflict the Madness status on you. Your health will quickly deplete as the madness bar rises. In the below section, we’ll go over all of the ways you can avoid this and complete Hyetta’s Quest while also defeating Vyke. So, let’s get started.

How to Get to Church of Inhibition in Elden Ring

To avoid the majority of enemies, travel northeast from Bellum Church and stay close to the eastern cliffs. Towards the Grand Dectus Lift, the cliffs give way to a hill, but the Frenzied Flame tower is a new threat here: (and some fire-possessed rats, giants, but you can ignore them).

The Frenzied Flame tower periodically erupts a massive flame beacon that rapidly fills your madness bar and drains your health and FP if you’re exposed to the flames. Keep the Flask of Crimson Tears handy to replenish your health while you hide behind rocks. You’ll lose a significant amount of health and will most likely die if the madness meter reaches 100%.

Keep moving to the left of the tower instead of sprinting up the hill. In Frenzied Flame Village, there is a Spiritwind that launches you behind the tower and largely out of the reach of the flames.

Assassinate any remaining foes before scaling the ridge at the northern end of the village. As you approach the church, you’ll need to plan your dashes carefully to avoid being re-exposed to the flame.

Neglect the Infected Finger and Enter the church with a vyke and a dash. If you die in combat, you can respawn in this location if you activate the Site of Grace. Upon defeat, Vyke releases the Fingerprint Grape. Give it to Hyetta when you get back to Bellum Church.

How to Start Hyetta’s Quest in Elden Ring 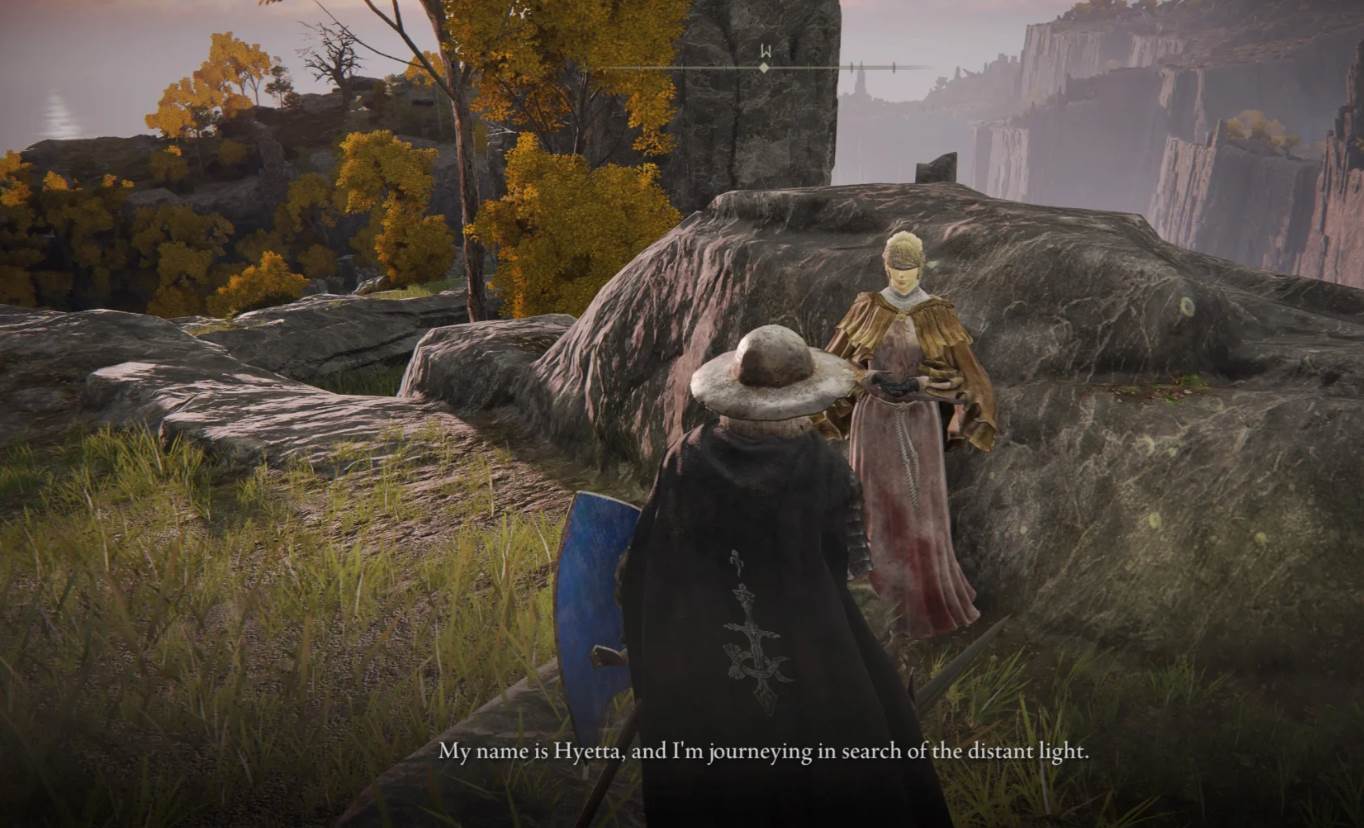 Following the completion of Irina’s quest on the Weeping Peninsula, which includes taking Irina’s letter to Edgar, defeating the Castle Morne boss (Leonine the Misbegotten), speaking to Edgar again, and witnessing his tragic reunion with Irina, Hyetta’s quest begins

Travel to the Revenger’s Shack in western Liurnia (west of Rose Church) and interact with the bodies there. Edgar the Revenger is an invading NPC that appears in the game. To obtain a Shabriri Grape, you must defeat him in battle.

If you’re north of Stormveil Castle, head to the Lake Facing Cliffs Site of Grace and talk to that woman. A wanderer in search of both light and Shabriri Grapes, she introduces herself as Hyetta. Handover your Shabriri Grapes.

A corpse at the farthest end of Stormveil Castle is where you’ll find the Grape if you haven’t already gotten it at the end of the castle. 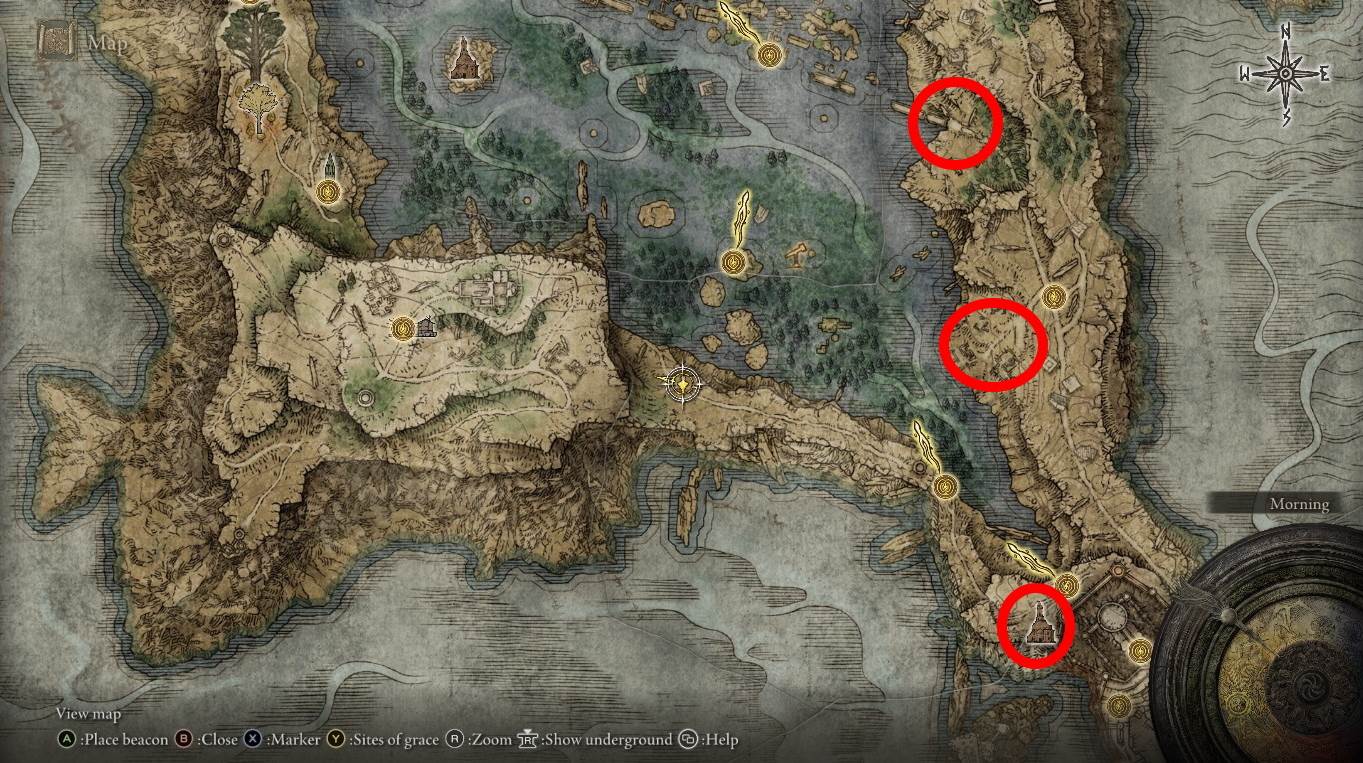 To find Hyetta, you’ll have to do it three times. On her next visit, she’ll be found south of Liurnia Highway North Site Of Grace at Purified Ruins. Check the long structure away from the barracks, on the cliff’s edge.

The final Shabriri Grape and a talisman can be found by returning to the barracks and defeating the soldiers there.

The Gate Town Bridge Site of Grace is Hyetta’s third location. You’ll see her near the rocks if you travel there and turn right.

Take the last Shabriri Grape and tell her what they really are. Until there’s no new dialogue, fast travel back to the same location and speak with her again. She’ll thank you for your help and say that she has a new mission.

The next stop is Bellum Church northeast of Raya Lucaria Academy, but Hyetta insists on a Fingerprint Grape. The Church of Inhibition is the place to go.

How to Stop the Madness Tower Elden Ring? 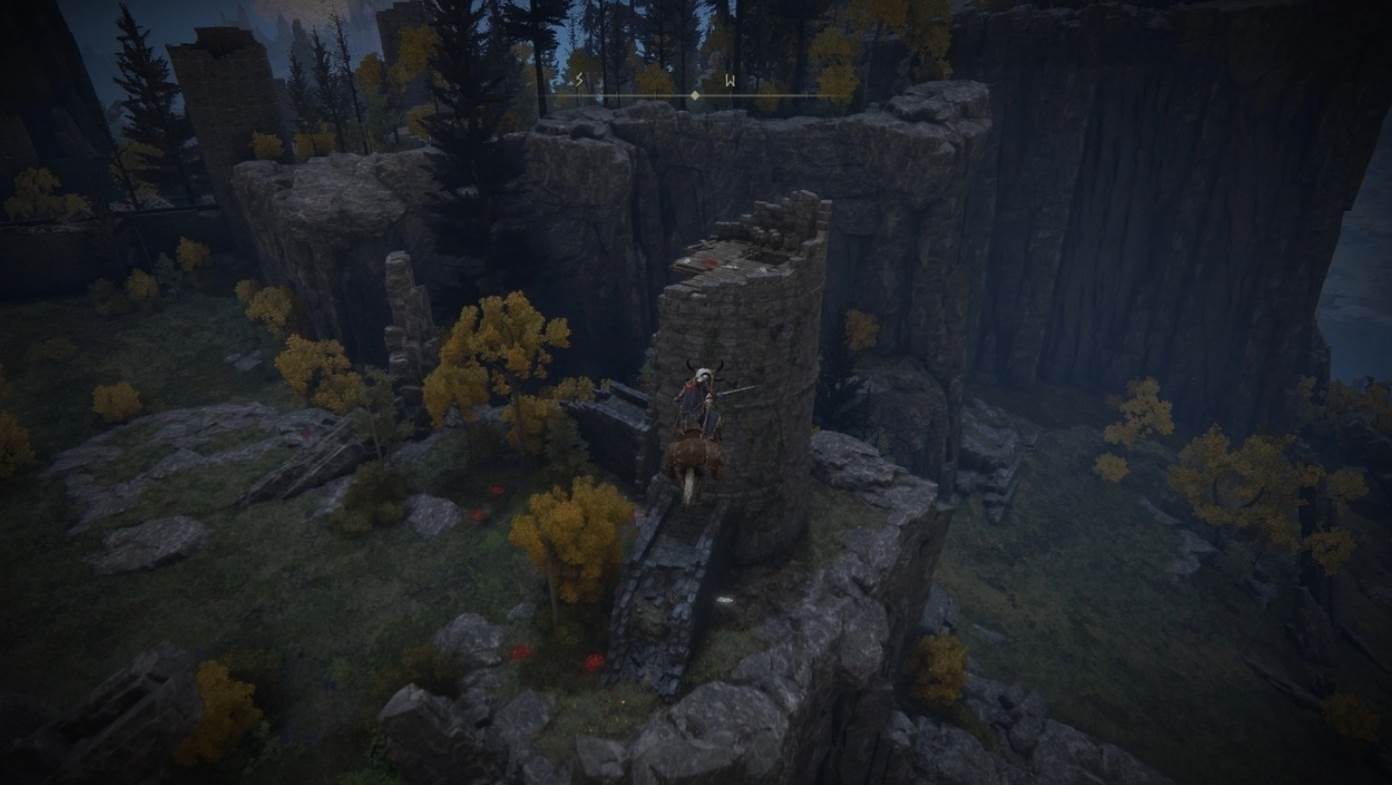 The Mushroom Armor Set is a good place to start, as it increases your Focus stat. Once you’ve done that, you can create Clarifying Boluses ahead of time. This consumable item reduces the buildup of Madness, making it a valuable tool in this situation.

Look for rocks and other objects that you can use to hide. It’s possible to wait out the Madness that your enemies inflict on you, and then slowly make your way to the Church of Inhibition. In the final option, you can head to a tower with six enemies and take them out there. Obviously, this will put an end to the buildup of Madness.

An unlockable platform that leads up to the Altus Plateau can be accessed from a tower located in Liurnia’s north-east corner to the right of the main path leading there. After killing the cultists who gather at the top of the tower, the “Eye” will be extinguished.

To get to the Eastern mountain pass, players should begin their journey at either East Raya Lucaria Gate or the Bellum church. As a reminder, the main path is crowded with knights, soldiers, and manned catapults, making it difficult to traverse.

As you ride your horse down the path, consider staying close to the cliff walls on your right. This will help the player avoid some of the more difficult encounters with the game’s enemies.

The player will eventually come across an opening in the cliffside that leads to an open field passageway with protruding rock columns and a rat infestation gone mad. A foreshadowing of what is to come.

After the player has dealt with the numerous rat packs, the tower should be in view. As soon as a fire appears above the tower, the player is at risk of building up madness on their madness meter, which, if it ever fills to its maximum, will deal enormous damage to them.

While using any strategy, players should keep their focus resistance to the highest level possible, and use rock formations as cover whenever possible. One path beneath the tower’s cliffside leads to a Spirit Spring that will propel the player up to the base of the tower, while the other path faces the tower and is directly beneath it.

The spirit spring path will have a wider range of rock formations to choose from, making it a better option for visitors. Approach the tower cautiously, using rocks as a form of protection. The best places to hide around the tower are behind the tower’s walls or the nearby upstanding columns.

Keep an eye on the madness meter as you clear the rats from the lower floors and ascend the tower. Cultists responsible for the incantation that’s been causing you so much grief can be found at the top of the tower; dispose of them all and the eye should vanish with their demise.

Where to Get Maiden Blood Elden Ring?

Hyetta longs to be a Finger Maiden, but she is forced to work for the Three Fingers instead. Outside of the Frenzied Flame area, you’ll find her at the bottom of the Subterranean Shunning Grounds. Before interacting with the Three Fingers, talk to her and take off your clothes.

Hyetta replaces Melina as your guiding Maiden after Melina rejects you for accepting the flame. With the Frenzied Flame Seal, your Frenzied Flame Incantations will be even more potent. Whether or not you complete Hyetta’s quest has no apparent impact on the final moments of Lord of Frenzied Flame.

The Frenzied Flame ending can only be avoided if you complete Millicent’s quest, fight Malenia, and obtain and use Miquella’s Needle before accepting the flame.

You can visit any of the game’s dead maiden locations to obtain Maiden’s Blood for Varre in Elden Ring. Church of Inhibition, located in the northeast of Liurnia of Lakes, houses one of them. You can see exactly where it is by looking at the map provided.

This is where you’ll find a dead woman slumped in a chair, leaning against a chunk of stone. Approach her and “dye cloth with maiden’s blood” using the “switch action” option at the bottom of the screen. Switch back to “pick up item” if you want the Finger Maiden set before you leave. Varre called you “maidenless” and now you’ll have to pay for it.

When you return to Varre in Elden Ring and give him the cloth soaked in Maiden’s Blood that he requested, you’ll be able to proceed with the next step in his quest. Along with the Pureblood Knight’s Medal, you’ll gain access to meet Mohg the Lord of Blood himself.

How to Beat Festering Fingerprint Vyke 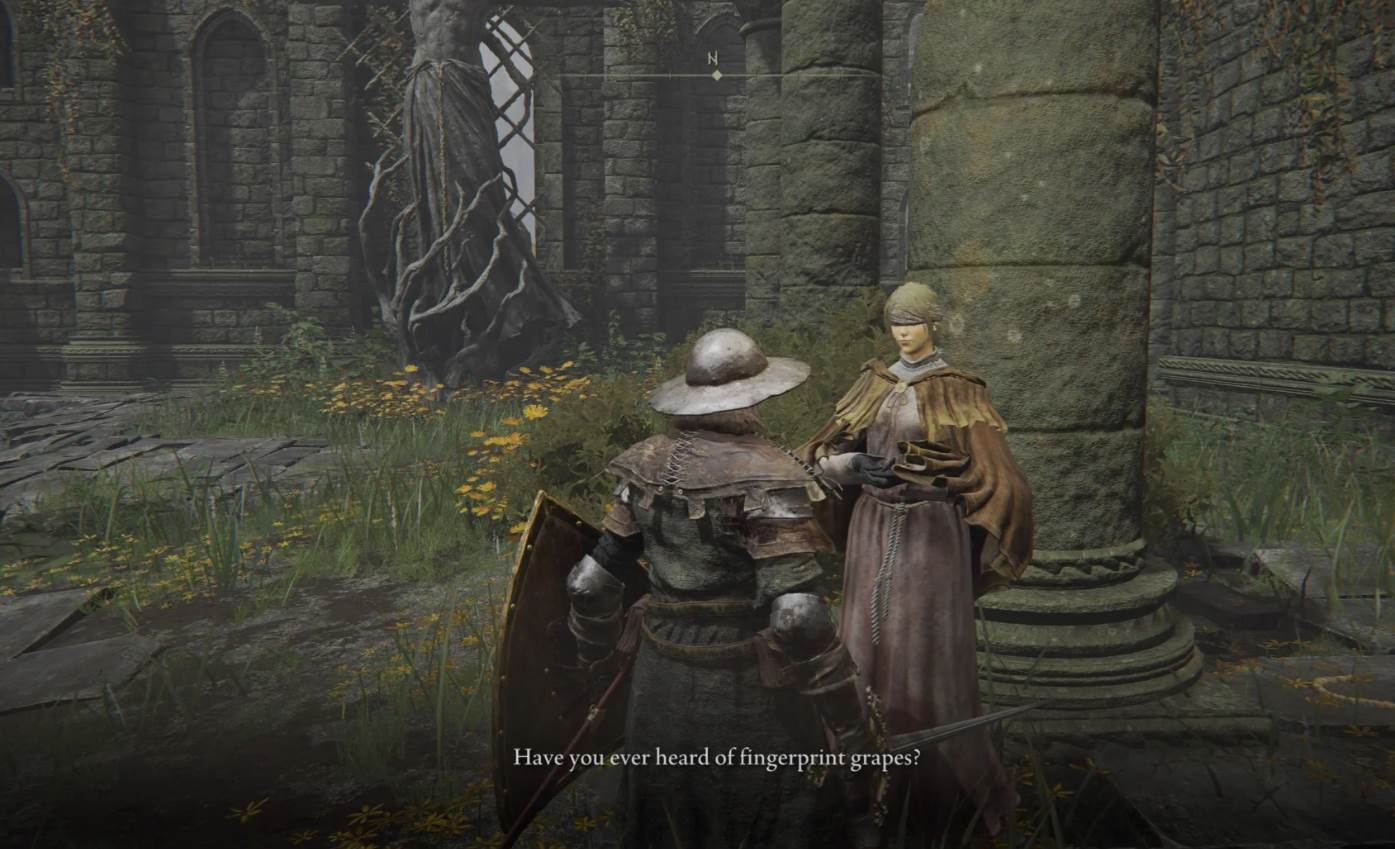 With a series of vicious attacks that raise your madness meter, Vyke is the most difficult NPC invasion battle in Elden Ring.

Vyke’s attacks almost universally cause madness. You’ll be unable to move for a short period of time and lose a significant amount of HP and FP if the meter fills up. Dodging, backing up, or both are your best options when Vyke unleashes a Frenzied Flame spell on you.

Run into the church to activate the Site of Grace before you begin fighting Vyke when the message appears that he is invading. The Frenzied Flame orb and its effects can be avoided on the way back up the hill.

Well, that’s all we have here about the location of the Church of Inhibition and every possible way to reach there in Elden Ring. We hope this guide helped you.

Check out our Elden Ring Map Size Comparison if you want to know more about the game.