For Season of Wrath, Hitman 3’s answer to Halloween is The Mills Reverie. It’s a spooky Escalation in which you’ll face increasingly terrifying levels that deviate from the standard Hitman gameplay format. 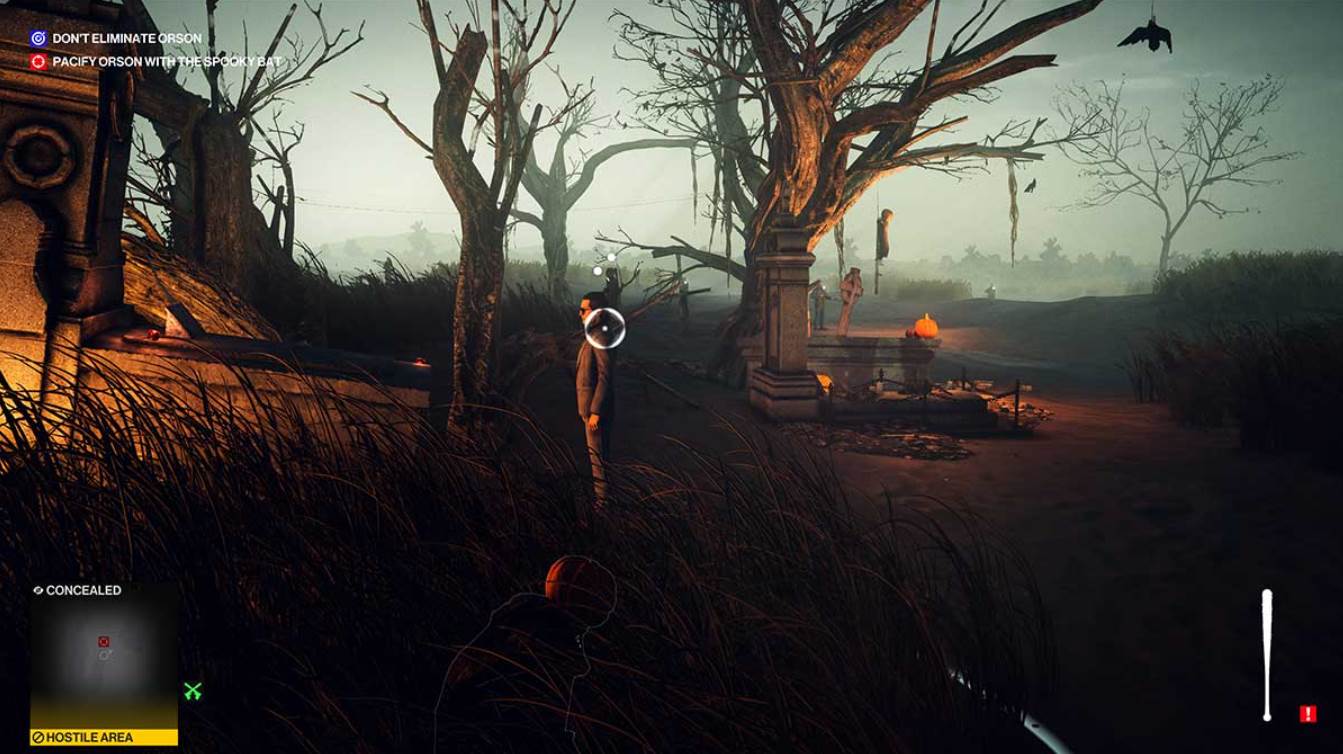 Here we will show you how to get a Silent Assassin rank and complete all three levels. 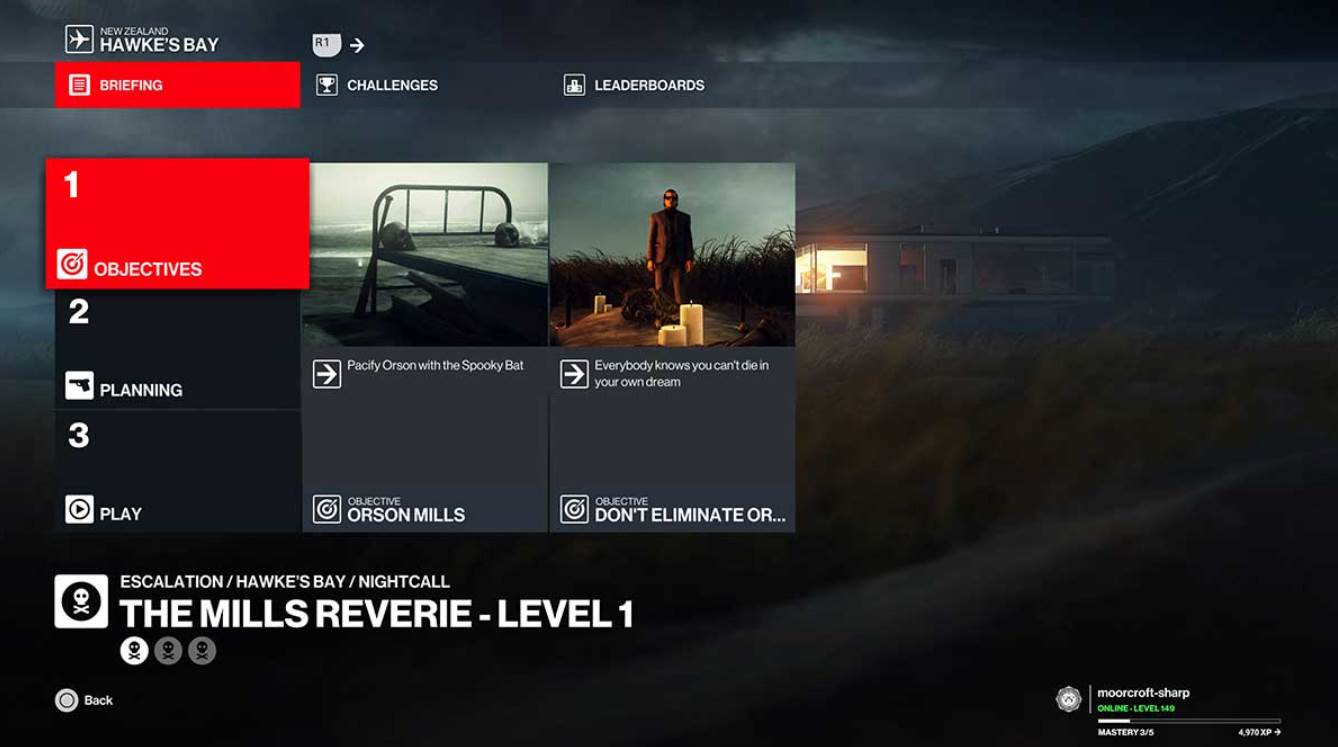 Pick it up and begin walking in the direction of your goal. Using instinct, you can see them off in the distance. To avoid being seen by any guards, stay in the tall grass and you’ll eventually find Orson. 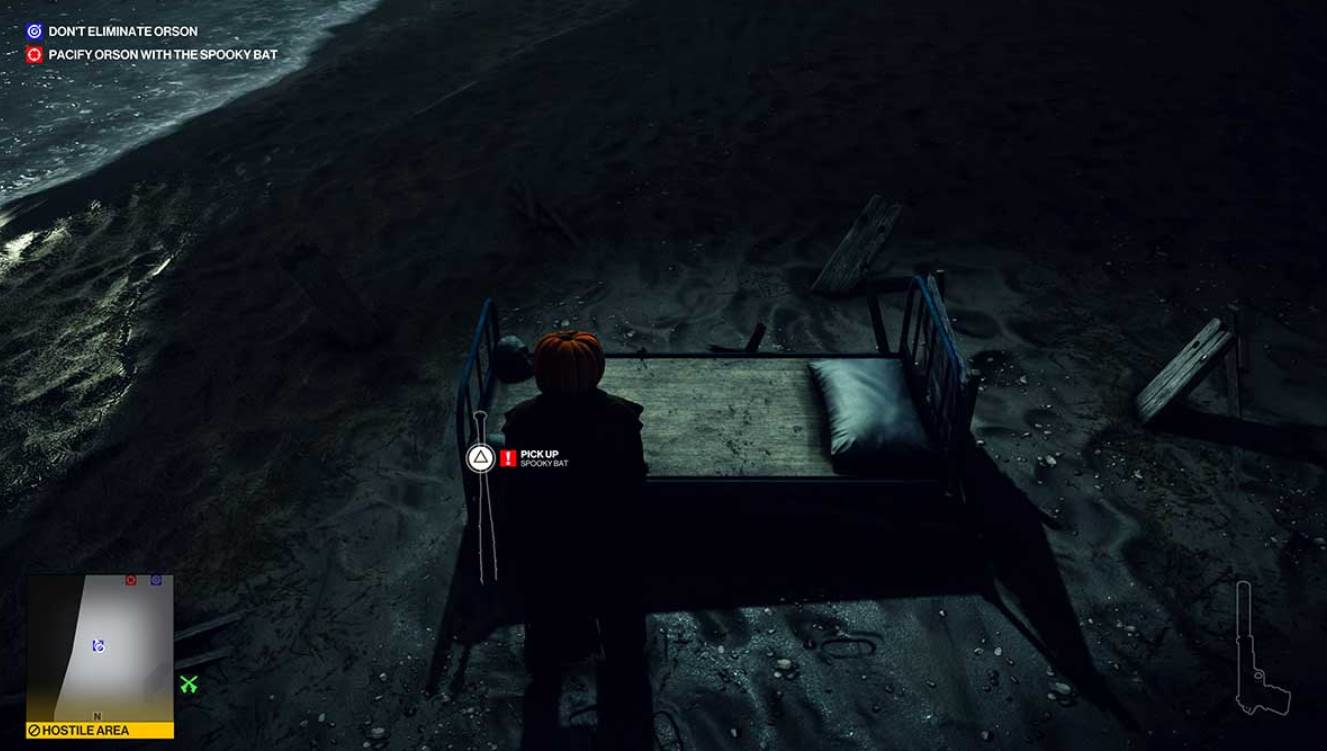 Find a good spot in the grass and wait for him. He’s on a path that takes him to various graveyards. Hit him with the Spooky Bat when he’s close and no one is looking. He vanishes as soon as you hit him, so all you have to do now is return to the exit.

The goal of this level is to pacify Orson with the Spooky Bat, but the stakes have been raised. You’ll need a lockpick to complete each objective, so bring one with you when you start the level.

The mission starts the same way it did in the first level, but the Spooky Bat isn’t by the bed this time. Instead, it’s out in the open, next to a guard and a gravestone.

Follow the objective marker to the Spooky Bat and kill the guard by luring him into the grass. You are now free to take up the weapon. 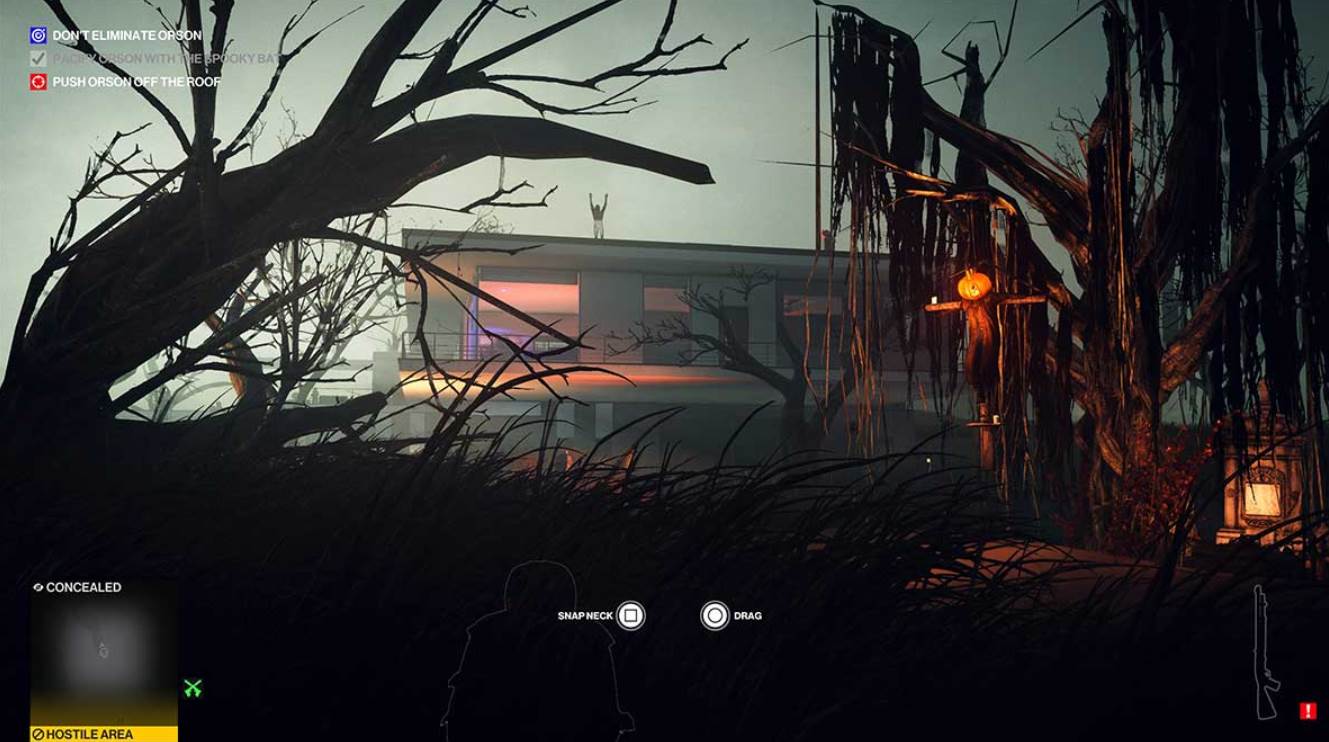 To take down Orson with the Spooky Bat, repeat what you did in level 1. This section of the Escalation is unchanged. However, once you’ve calmed him down, you’ll be given a new mission: to push him off the roof.

Make your way to the side of the house and into the garage. To gain access, use your lockpick to unlock the door and gain access. The garage door lock is marked on the map below.

Make your way upstairs, stopping to pick up a few things along the way. Near the garage, there are food cans and a wrench that will suffice. Before sneaking up to the roof, keep an eye out for the guard patrolling the area on the first floor.

Two guards will move up here and station themselves near the stairwell for a while. As soon as they leave, sneak up and to the left.

Wait for the guard on the left to leave the area before returning to his patrol. Distract him or allow him to almost spot you so he will approach you. Then run away from him.

You’re delaying the two guards’ patrol synchronization to give yourself a chance to slip past. Allow the guard to return to his patrol route. As he returns, you should be able to sneak past him on his left. 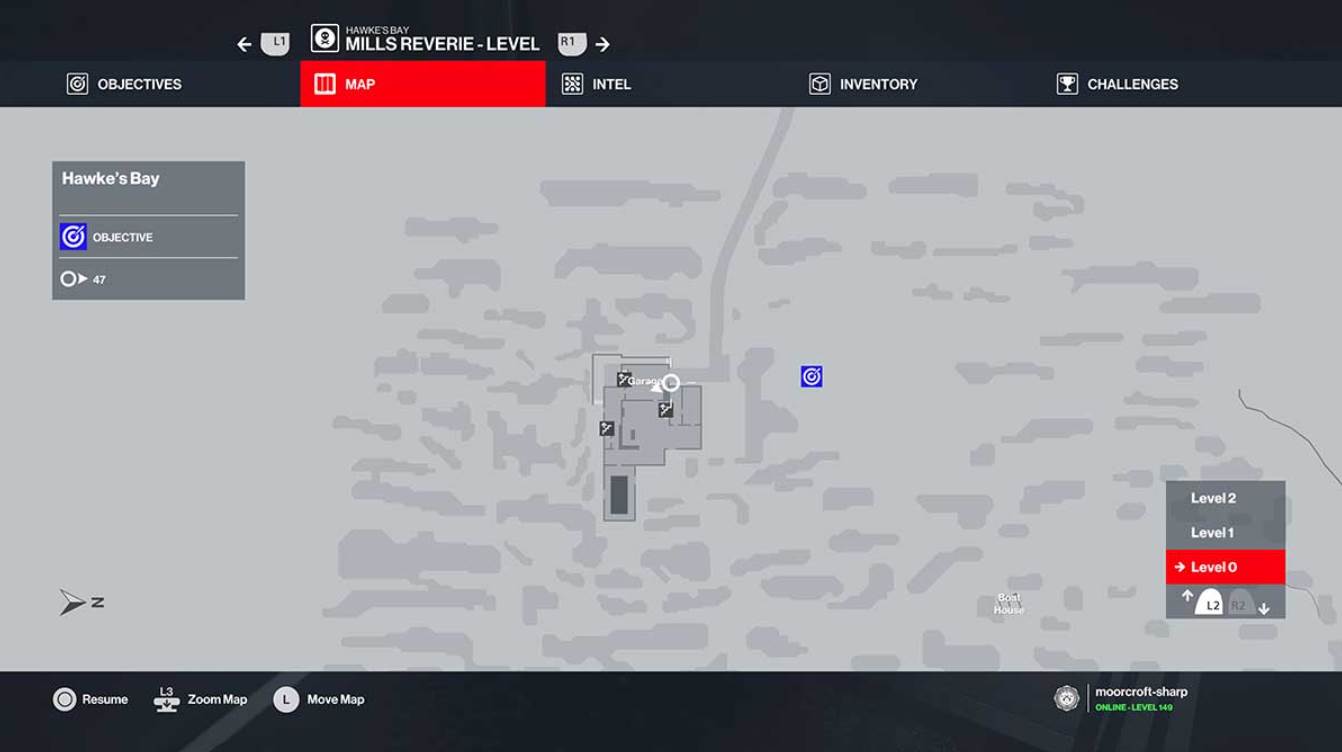 Approach Orson and push him off the roof. Keep an eye out for the guards who will continue to patrol behind you.

You’ll now be given the task of sacrificing Orson to the circle of weeping angels. This is the candle-lit circle at the bottom of the house, near the garage entrance.

If it makes life easier for you, you can now subdue the guards with a thrown melee weapon to get off the roof. Hide behind the objects on the roof if you don’t want to be seen.

Return to the basement and drag Orson’s body away from the mattress it landed on and into the grass. A guard is stationed near the circle of weeping angels, and you must remove him immediately.

Use whatever thrown melee weapon you have on hand, but keep an eye out for the guard on the balcony above you. He’s patrolling the area, and if you don’t stay in his blind spot, he’ll see you dragging bodies.

Before you sacrifice Orson, wait until he walks around the other side of the house. When you do, Orson will vanish and the candles will all light up. Then, using one of those same eerie wardrobes, exit the level.

Level 3 has the same two objectives as level 2, but you must also pacify or eliminate every guard on the map. As you might expect, this significantly lengthens the level.

Because this is a Silent Assassin guide, we’ll pacify every guard because killing anyone who isn’t the target will result in you losing your rating.

The main goals for using the Spooky Bat to calm Orson down and push him off the roof remain the same. Complete these using the same methods as the previous ones. The only difference now is that it’s worthwhile to eliminate as many guards as possible while moving.

Make every effort to conceal their bodies. Otherwise, you may find yourself in hot water. We’d also advise waiting until you’ve pacified Orson for the first time before dispatching too many guards, as his patrol passes through a number of them.

Before you sacrifice Orson to the circle of angels, make sure you pacify every guard on the roof. 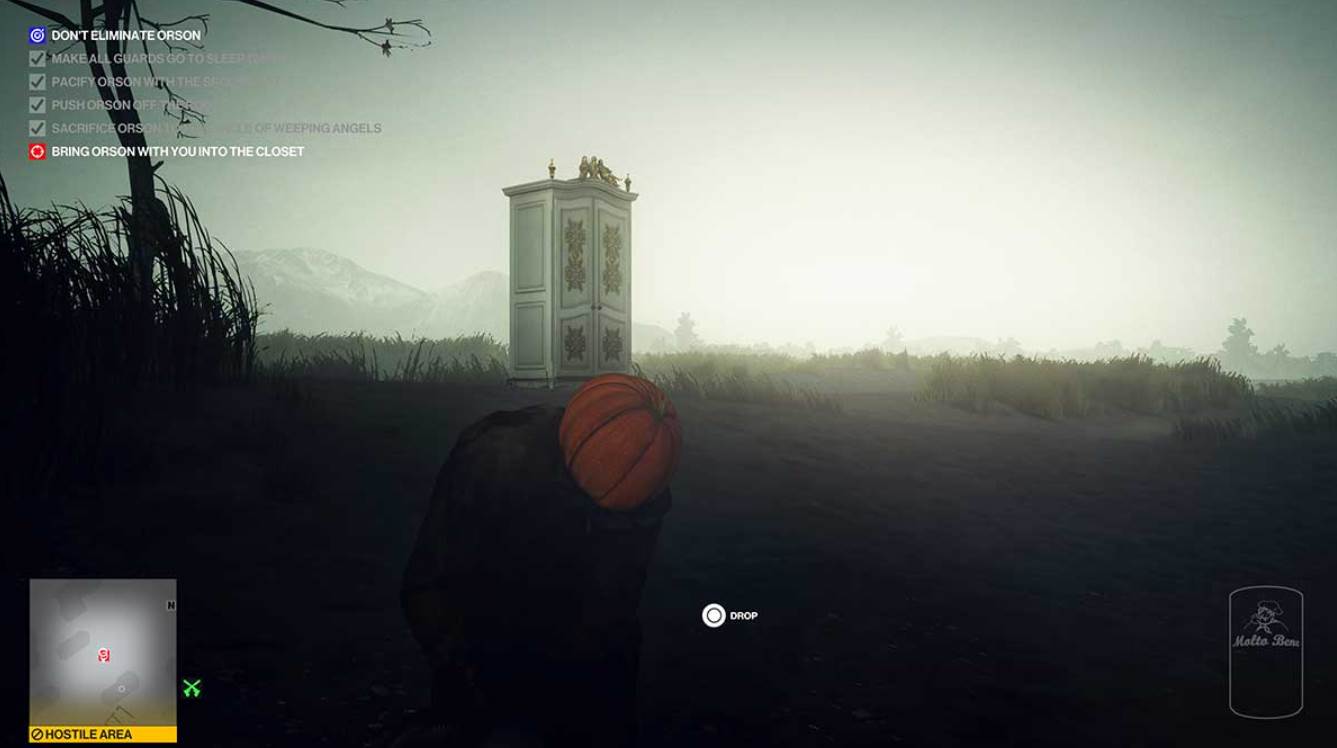 He’ll reappear in the shallow grave on the beach as soon as you do, and you don’t need the extra trouble. Your final goal is to bring Orson into the wardrobe with you, so go find him, subdue him, and place him in a wardrobe. Then you’ll be able to exit via the same wardrobe.

After completing this Escalation, you’ll be able to use the Tactical Wetsuit disguise and the Bat Shuriken in all of the game’s locations.

We hope this guide helps you to complete The Mills Reverie in Hitman 3. If you liked this, don’t forget to check out our gaming, troubleshooting, and computing guides.

How to Fix Hitman 3 Down? How Can I Check the Server Status

How to Unlock the Bat Shuriken in Hitman 3