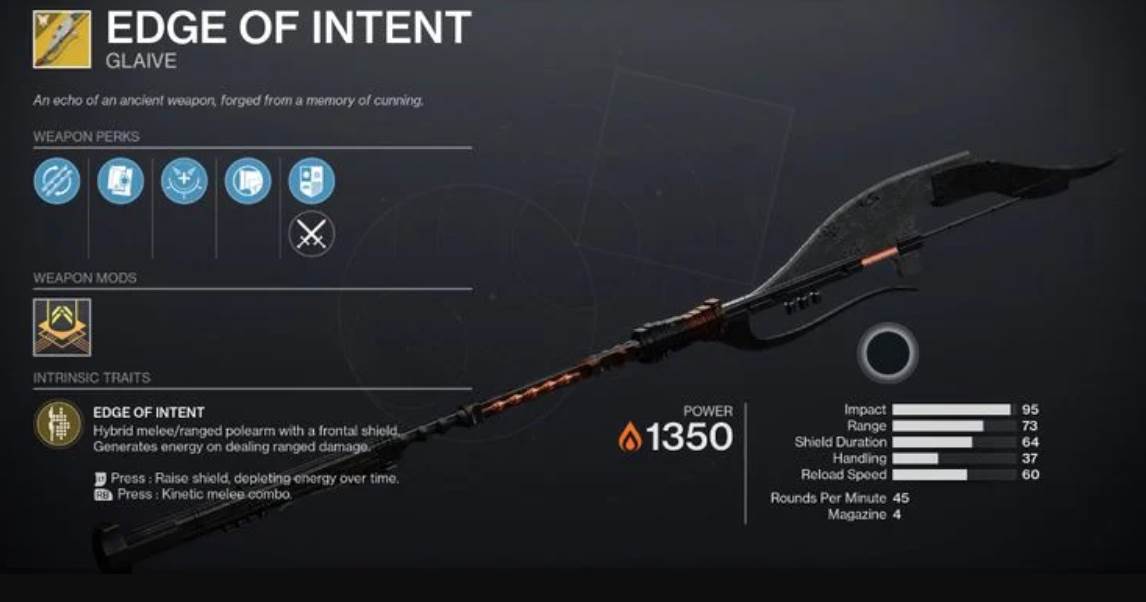 How to Get Edge of Intent Exotic Glaive in Destiny 2?

The Edge of Intent Glaive appears to be the weapon of choice for the Warlock class in Destiny 2, with excellent stats and enough difficulty to make this weapon worthwhile.

The Edge of Intent, unlike other Legendary and Exotic weapons, requires a few more steps to fully complete and craft before you can use it.

You or another warlock on your team can use Restorative Turret, a trait of this exotic Glaive, to create an instant healing turret after hitting an enemy, extending your team’s overall life expectancy. Only if the weapon’s energy is full can this be done.

You’ll need to travel to Mars and find a pattern on the map to get the Edge Of Intent. In order to unlock the Edge of Intent blueprint, you’ll need to complete seven short quests.

Fortunately, you’ll unlock them as you progress through The Witch Queen. In order to fully craft this unique weapon, one must first complete the campaign. However, this Glaive is worth the time and effort.

You’ll be able to make the Ascendant Alloy, an exotic material, in the Enclave on Mars once you’ve obtained the blueprint.

Once you’ve created it, you’ll have access to one of the game’s best Glaives, and you’ll be able to customize it to your heart’s content in order to make it the ultimate survival tool.

There aren’t many options for customizing the Edge of Intent’s performance, but there are a few that can have a significant impact. In Destiny 2, The Witch Queen, the best Exotic Glaive for Warlocks is one with the following perks:

Alloy Magazine: When the magazine is empty, reloading is faster.

Finally, the Restorative Turret exotic trait of the Edge of Intent grants Warlocks the ability to construct a healing turret after a Glaive shot hits an enemy. This trait is only available to Warlocks.

A full weapon energy bar is required for this, but it adds to the Warlock class’ healing potential via rifts and the Well of Radiance ability in Destiny 2, respectively.

Well, that’s all we have here about how you can get Edge of Intent Exotic Glaive in Destiny 2 The Witch Queen. We hope this guide helped you.