Breaking the Tail Seal is a requirement for the Genshin Impact Tail of Watatsumi quest. You’ll need quick reflexes and keen vision to use an electrogranum to activate the six small stone pillars. Two of the pillars here are hidden in the undergrowth, which presents a number of issues. If you’re having trouble with this step, then check out our Break the Tail Seal Genshin Impact Tail of Watatsumi guide.

One of the requirements for unlocking Enkanomiya in Genshin Impact is to complete the Moon-Bathed Deep World Quest. Players must collect Spirit Pearls at various locations throughout Watatsumi Island, Inazuma, during the quest.

The task is called ‘Break the Tail Seal,’ and it takes place southwest of Bourou Village. Because Inazuma has so many mechanisms, new players may be perplexed about how to complete the quest. In that case, readers can continue reading this article to learn how to break the Genshin Impact’s ‘Tail’ seal. 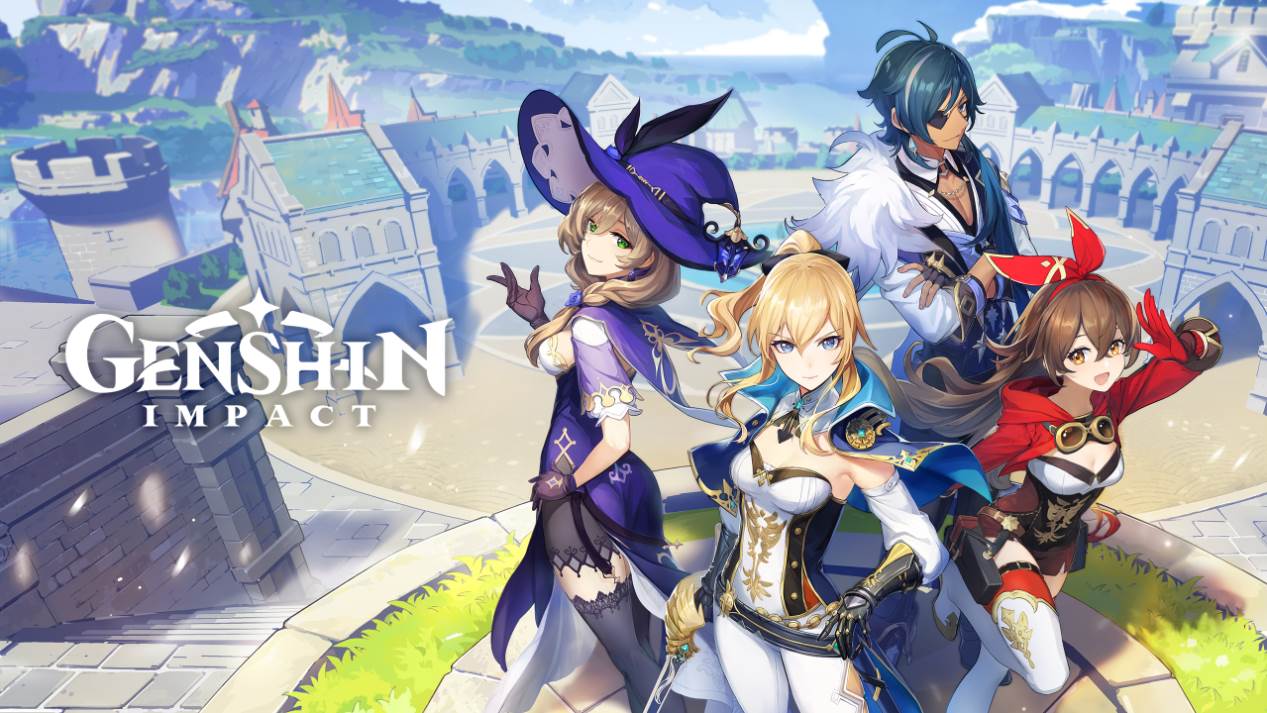 How to Break the ‘Tail’ Seal in Genshin Impact?

You must locate the Tail Seal in order to break it in the Genshin Impact Tail of Watatsumi quest. To the southeast of Watatsumi Island’s main land mass, one of the smaller islands is located.

The screenshots below show you exactly where to look. Now that you’ve located it, let’s move on to the meat of the matter: how to get to the Tail Seal. To get an Electrogranum, go to a spawn point near the shrine where the seal is kept, and then begin the climb up the steps.

A simple activation of the shrine’s pillars is all it takes. To recapture the electrogranum, all you have to do is touch them all. Due to their position in the bushes, two of them are difficult to find.

There are four pillars on each side of the Genshin Impact Tail Seal of Watatsumi Tail Seal, so keep that in mind when trying to break the seal. Two are visible and two are hidden behind bushes on the right. There are two statues on the left, one on a rock near the shrine and the other in the open. 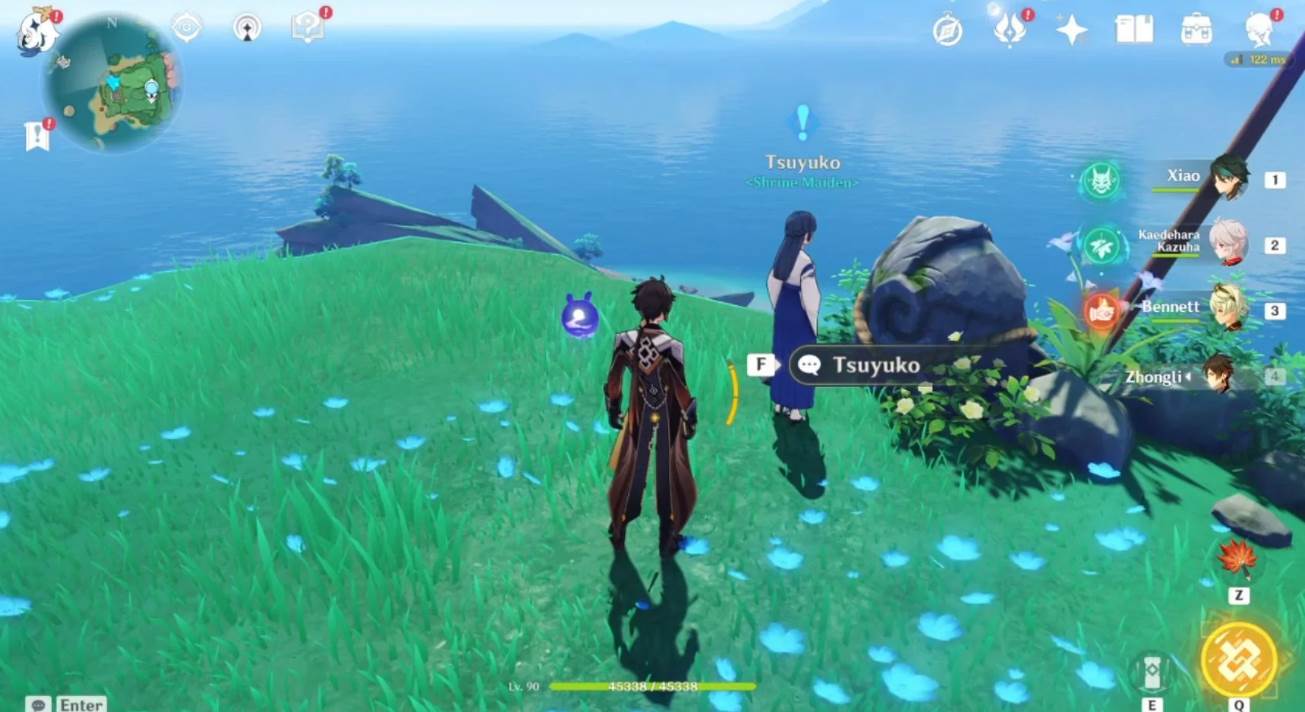 First and foremost, ensure that you begin the quest by speaking with Tsuyuko, who can be found northwest of the Statue of the Seven in Mouun Shrine. After the conversation, the quest will indicate four locations where the Traveler must visit in order to unlock a seal. 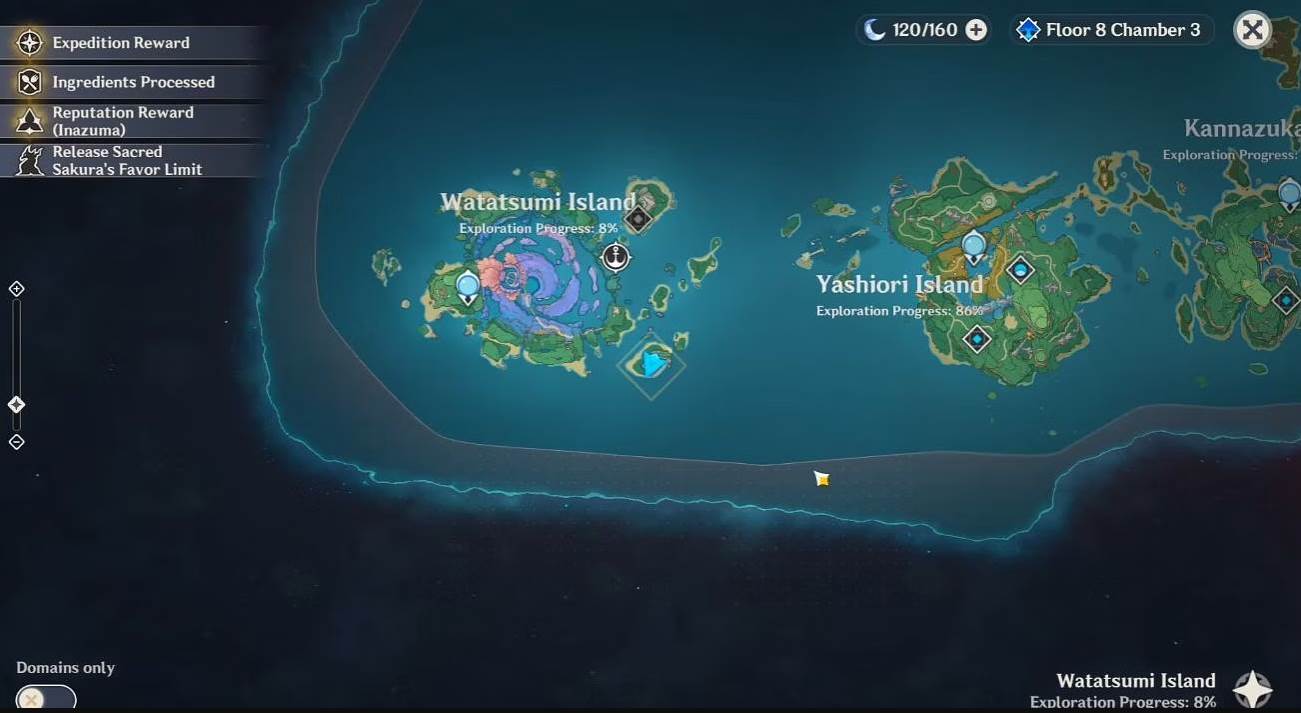 One of the mentioned locations is on Bourou Village’s southwest side. You won’t have any trouble finding this location if you just follow the quest navigation. 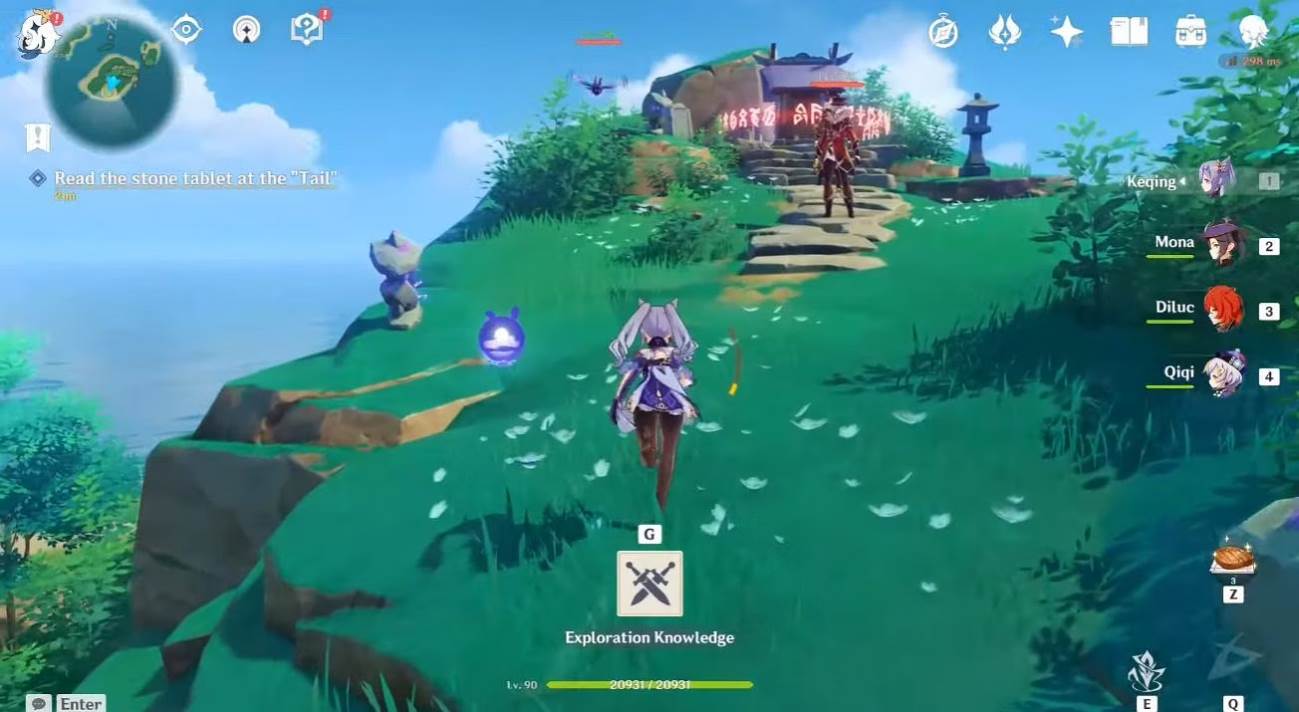 Fatui enemies guarding a sealed shrine can be found at the location. Before attempting to solve the puzzle, defeat the enemies. After you’ve defeated all of your opponents, interact with the stone tablet next to the shrine to begin the task. 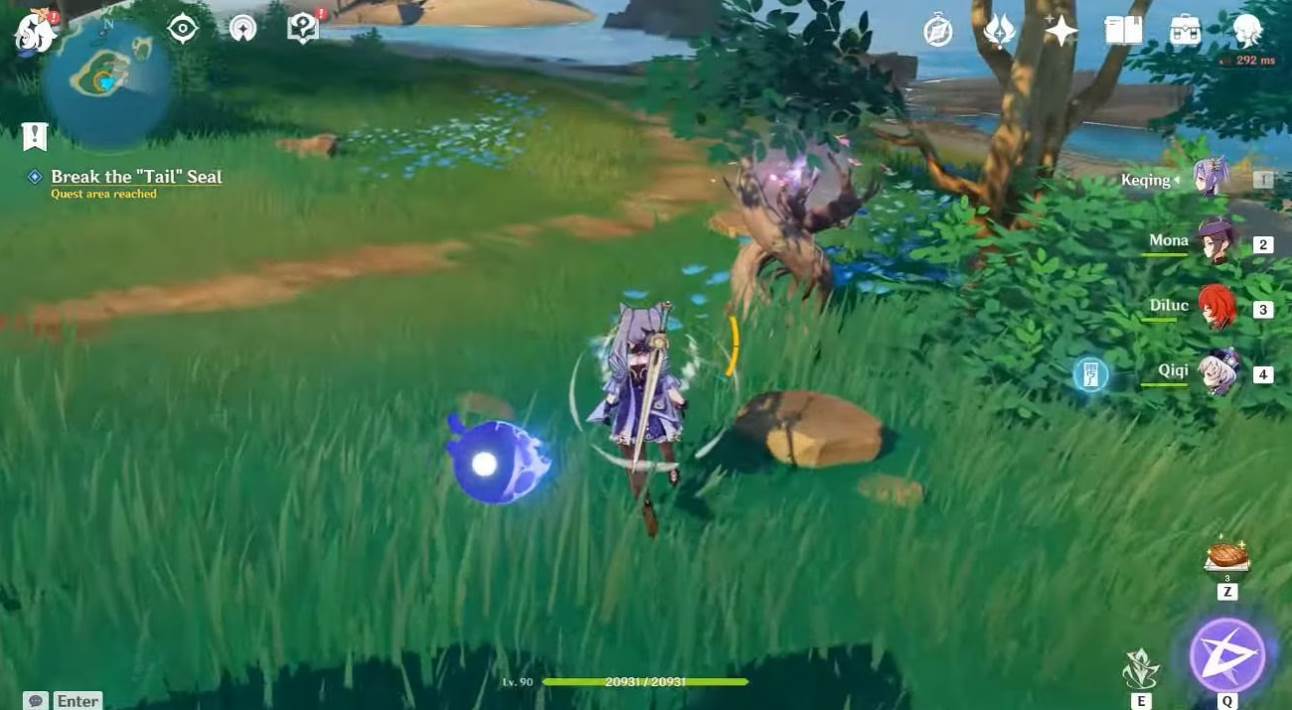 You must approach a Thunder Sakura Bough near the shrine and summon an Electrogranum to complete the puzzle. Then, using the Electroganum your character possesses, walk near six Electric Lamps to light them up. 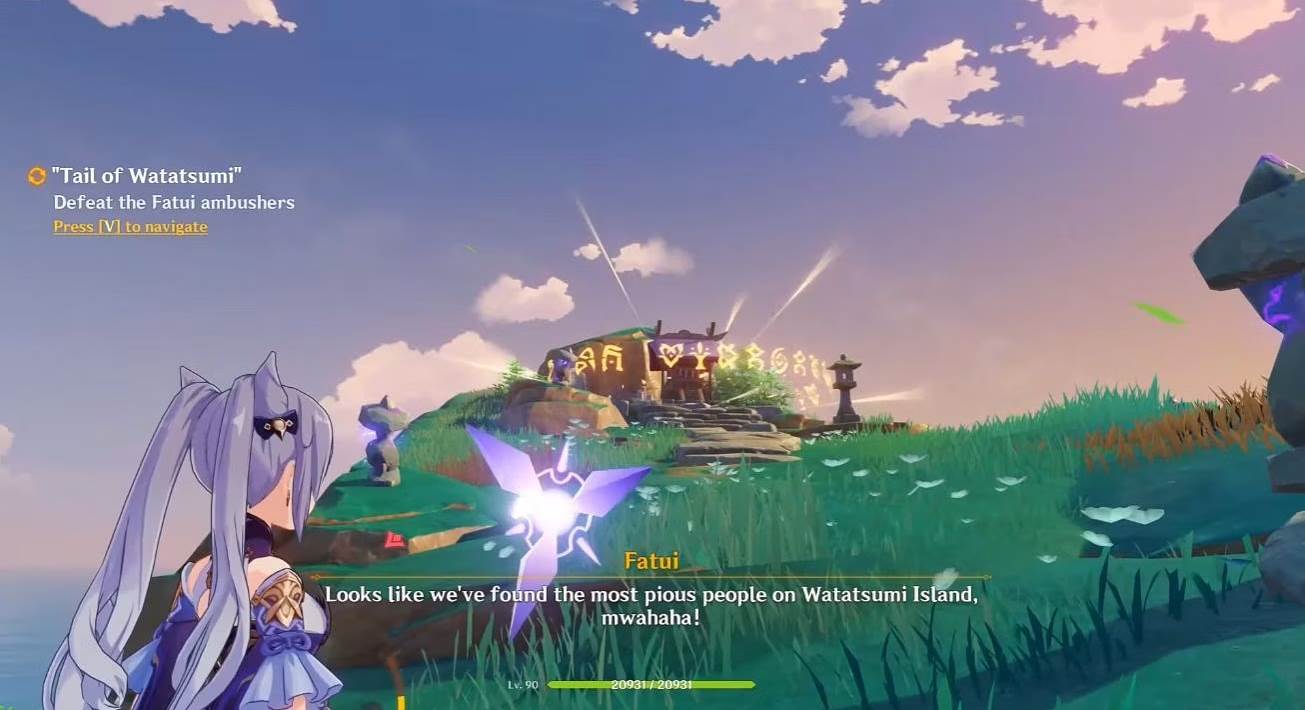 After all six Electric Lamps have been lit, the seal around the shrine will be broken. Unfortunately, multiple Fatui enemies will spawn before you can collect the Spirit Pearl from that shrine, obstructing your progress. Before collecting the Quest Item, you must first defeat all of your opponents. 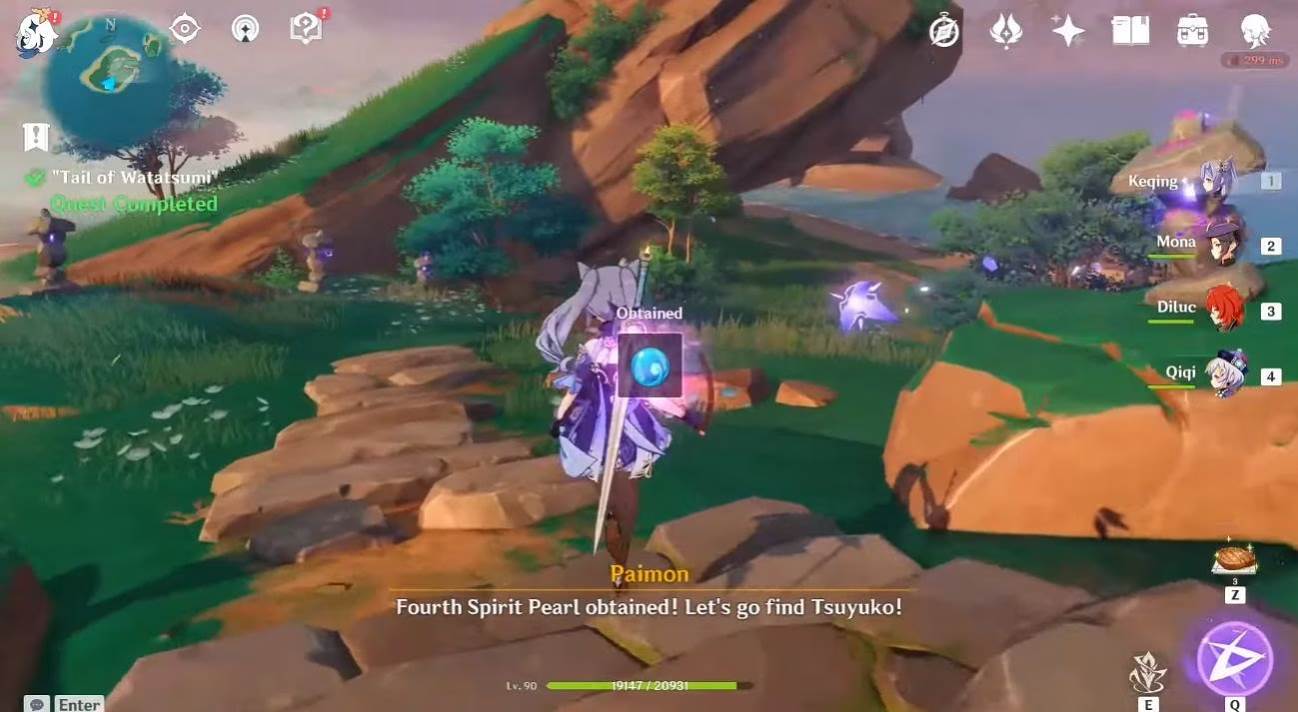 After all enemies have been defeated, return to the shrine to collect the Spirit Pearl and complete the ‘Tail of Watatsumi’ quest.

The Moon-Bathed Deep World Quest does not end when you complete the ‘Tail of Watatsumi.’ To finish the main quest, players must collect three more Spirit Pearls from various locations.

For some more help, here’s a video to assist you. Courtesy of WoW Quests YouTube channel.

Well, that’s all we have here about how you can complete and break the Tail seal in Genshin Impact. We hope this guide helped you.

If you liked this, don’t forget to check out our other guides on how you can make three special unmoving essential oils, the Genshin impact 2.6 release date, and how to solve the Araumu Puzzle. Furthermore, if you have any questions or suggestions, please use the comment section below to contact us.