Fans are speculating that Rockstar Games merchandise may have just leaked the official GTA 6 logo after a temporary store update.

With GTA 6 confirmed to be in development, fans are eagerly awaiting any tidbits of information they can find. There’s never a shortage of headlines to captivate the audience, from leaked images to alleged story details.

The fact that nothing has been officially announced, not even a logo, hasn’t stopped new rumors from rocking the boat.

The most recent flurry of reports cites an alleged change to the Rockstar Games store’s website. However, despite the lack of proof, many believe that this temporary refresh gave us our first glimpse of the GTA 6 logo.

On April 15, a single new item was added to the Rockstar merch page on the official website. This new item wasn’t quite ready to go live, as evidenced by a screenshot taken just before the store was purportedly rolled back.

The new shirt in question had a codename and appeared to be free, rather than having a proper label and a price attached. Black Americas Logo” was the name given to a piece of clothing that featured a GTA 6-exclusive logo.

Many people mistook this leaked image of GTA 6’s logo, which features the classic roman numerals “VI” in pink and blue, for the official one. Here’s the tweet which leaked the details:

GTA 6’s logo (VI) has leaked on Rockstar store before they took it down. The title mentioned ‘Black Americas logo’. I can confirm this is Rockstar store. https://t.co/EEhtcmzKTe #GTA6 #GTAVI pic.twitter.com/7iV7ZUSAtQ

For the time being, it’s impossible to tell if it’s genuine. According to some well-known GTA leakers, they had previously seen this logo somewhere else on the site.

Others, on the other hand, claimed that the Rockstar website had not been updated in the last 24 hours. An archive such as “Wayback Machine” or some other third-party service would almost certainly preserve this fictitious T-shirt, no matter how short its lifespan. 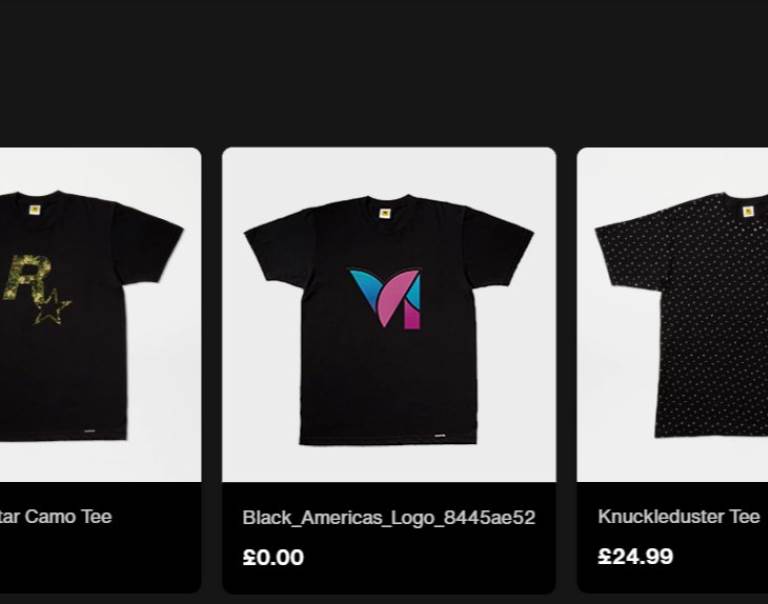 This information should therefore be taken with a large grain of salt. However, there is every chance that it is just another fan-created GTA 6 logo in a long line of fan-created logos.

We’ll know soon enough whether or not this is true. Rockstar has confirmed that GTA 6 is well underway, so we can expect an official logo and a first trailer shortly.

Well, that’s all we have here about the GTA 6 logo leaks. We hope you really enjoyed this guide. If you are still playing GTA 5, make sure to check out the best GTA 5 mods and the best clothing stores in GTA Online.