Do you want to know how to beat Margit, the Fell Omen in Elden Ring? If so, you are in the right place. Margit, the grotesque and disdainful guardian of Stormveil Castle, is likely to give you a lot of trouble unless you’re an experienced Souls player. However, you can employ a few strategies to make this battle with the boss a lot less difficult. Keep reading to beat Margit easily.

Elden Ring’s first major boss is likely to be Margit. Stormveil Castle’s first major story destination is guarded by a ferocious and savage enemy. He’s a tough early-game opponent for a Tarnished, with a wide range of attacks that deal both physical and holy damage. 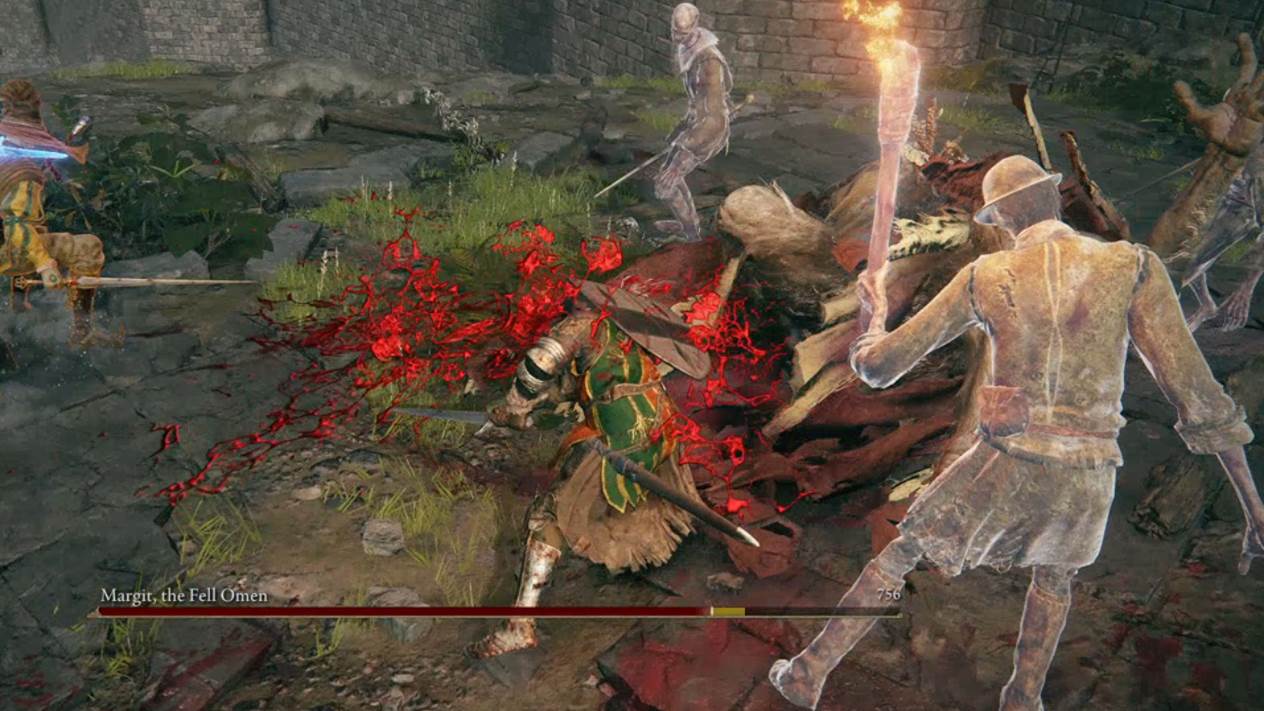 Content Overview ▼
1. How to beat Margit, the Fell Omen in Elden Ring?
1.1. 1. Purchase Margit’s Shackle from Patches in Murkwater Cave
1.2. 2. Use Your Spirit Ashes and the help of Sorcerer Rogier
1.3. 3. Use Heavy Attacks on Margit to break His Super-Armour
1.4. 4. Roll Away from Long Combos and Roll in for Short Combos
1.5. 5. Stay Away from the Arena Edges

How to beat Margit, the Fell Omen in Elden Ring?

Here’s a guide to show you how to beat Margit if you’re stuck. You’ll find our best advice for dealing with this formidable foe by scrolling down a bit.

There’s a special item you can get ahead of time that will make the battle against Margit a little easier. Take a detour up the river from Limgrave’s main bridge to explore Murkwater Cave, a small cavern.

Make Patches surrender by fighting him until he does. Keep him alive. You can buy Margit’s Shackle for 5,000 runes when you return to Murkwater Cave the next time you’re there.

During the first phase of the Margit fight, Margit’s Shackle can be used up to twice (before he whips out his Holy Hammer at around half-health). The item has no effect after that.

When activated, Margit will fall to the ground and remain there for a few seconds, allowing you to unleash a full combo of attacks on him. Take advantage of it before its usefulness runs out.

2. Use Your Spirit Ashes and the help of Sorcerer Rogier

You’ll see a golden rune on the floor just before you enter the mist to fight Margit. An NPC ally can be summoned whenever you see this symbol, so keep an eye out for it.

Sorcerer Rogier, a magic-wielding sorcerer, can be summoned in this situation to protect you from some of Margit’s attacks.

To keep Margit from focusing solely on you, use your most powerful Spirit Ashes in battle. Here, Lone Wolves are a good option. Every little bit helps in the face of Margit’s wide-ranging attacks.

3. Use Heavy Attacks on Margit to break His Super-Armour

Margit is a tough boss, but he’s not indestructible. Take advantage of the gaps in Margit’s attention you’ve created by using Margit’s Shackle and adding additional targets.

Hit him with Heavy Attacks whenever he is engaged in combat or attempting to recover from an attack. If you inflict enough damage on him, you’ll knock him unconscious, allowing you to score a Critical Hit and inflict additional damage.

4. Roll Away from Long Combos and Roll in for Short Combos

Because of his long-range and long-lasting attacks, you should not attempt to block Margit’s attacks. If you’re good at parrying, great; if not, you should practice dodge-rolling a lot during this battle.

Keep yourself out of Margit’s impressive range by rolling away from his long combos as soon as you can recognize them.

But if you’re looking for a shorter combo with just one or two attacks, roll into him. In order to take advantage of his stunned state and prevent him from using ranged attacks, melee characters should stay close to him.

5. Stay Away from the Arena Edges

If one of Margit’s attacks manages to push you over the edge of the arena, you’ll be dead in a matter of seconds. Try to avoid the edges and avoid getting in the way of Margit’s path as much as possible.

Well, these were the tips and tricks about how you can beat Margrit in Elden Ring. We hope this guide helped you. A lot of players while playing, complained about stuttering in Elden Ring, make sure to check it our if you are facing that issue as well.